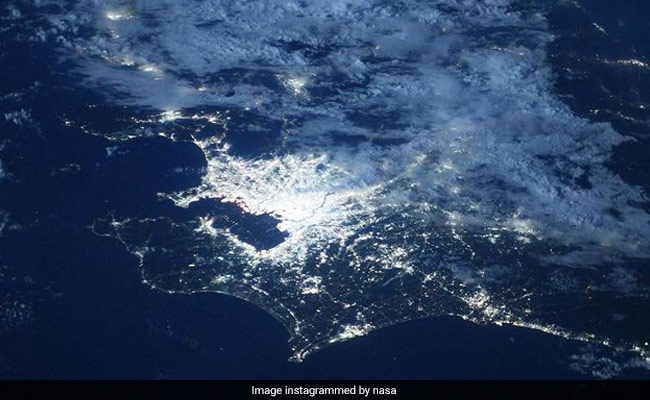 "The Olympic games light up the night," NASA captioned this image of Tokyo

NASA has shared a night-time image of Tokyo, captured from the “vantage point” of the International Space Station (ISS), which showed the Japanese capital glowing stunningly bright “with the magic” of the Olympic Games. The American space agency said the image was captured by astronauts aboard the ISS, including Shane Kimbrough. It showed Tokyo illuminated with white light. The Summer Games are being held in Japan after a delay of a year because of the pandemic.

Surrounded by the blue Pacific Ocean, the illuminated part in the image is clearly visible. Multiple games, some at night and outdoors, are played during the Olympic Games, so proper lighting is required. Also, players, staff and visitors move around the city for their scheduled events all the time. This could have also led to an increase in energy consumption as is visible even from the sky.

But most people expressed their excitement only through emojis.

According to NASA, the space station orbits Earth at an average altitude of approximately 250 miles (around 402 km). Serving as a home for astronauts and cosmonauts, it travels at 17,500 mph, meaning it orbits Earth every 90 minutes.

The opening ceremony for the international event was held on July 23 in a nearly empty stadium and under strict Covid-19 guidelines. After the customary speeches, Japanese Emperor Naruhito opened the Summer Games. Tennis ace Naomi Osaka lit the Olympic Cauldron.

More than 200 countries and national committees represented by over 11,300 athletes are participating in the Olympics this year.The closing ceremony is slated for August 8.