The footage shows a family of seven running and playing around two train tracks. 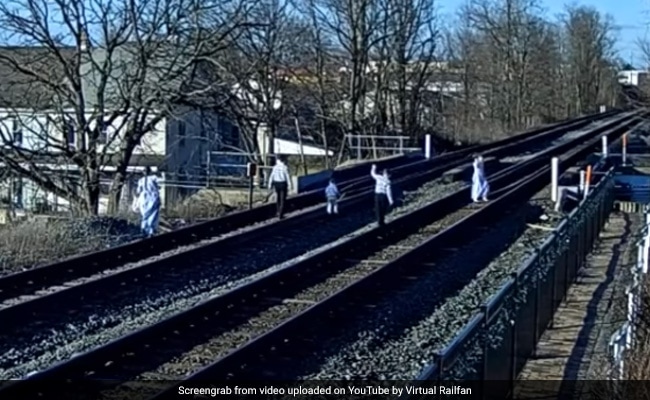 A family in Pennsylvania had a narrow escape from a speeding train.

A rail camera in Franklin County, Pennsylvania, has captured the heart-stopping moment a family was forced to run from railway tracks to avoid an oncoming train. A short video of what could have been a tragic accident was shared on YouTube on Monday. According to ABC News, the rail camera is owned and operated by Virtual Railfan - the YouTube account that shared the video on YouTube.

The two-minute footage, shared by Virtual Railfan, shows a family of seven running and playing around two train tracks. A photographer clicks their pictures while they romp around. Their photography session is interrupted, however, by an oncoming train as one of the kids yells "Here comes the train!"

The video then shows the family running for safety in different directions. It also captures the terrifying moment a young child from the group struggled to get out of the tracks, before someone picked him up and sprinted away from the oncoming train.

Watch the frightening video below:

Since being shared online two days ago, the video has collected over 98,000 views and hundreds of horrified comments criticising the family.

"Nobody should ever be on the tracks for ANY reason. I hope those people learned a lesson," wrote one person in the comments section. "It really shows how the general public has no idea of the speed, size, and danger that trains bring," said another.

The family's actions were also criticised by Brock Kerchner, the state coordinator for Operation Lifesaver of Pennsylvania, which focuses on railroad safety and education.

"You wouldn't stand in the middle of an airport runway with a plane bearing down on you to take a picture so why would you do it on a railroad track?" said Mr Kerchner to ABC News. "This is a place for the trains, you always expect a train any time, there's no schedule."