One Reddit user said the creature looks like pipefish, an explanation accepted by the person who posted the photo. 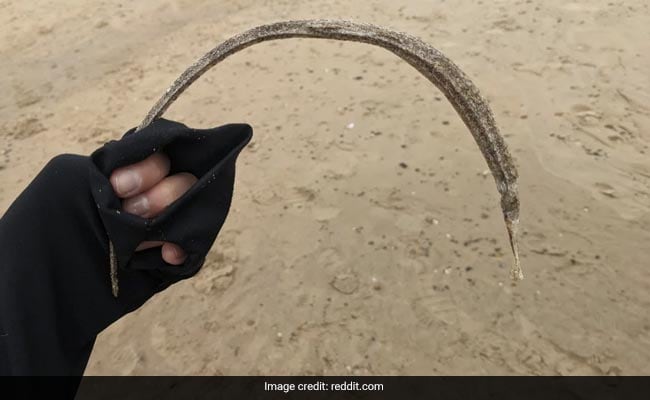 A mysterious sea creature has sparked a debate on social media platform Reddit. The long, thin, grey animal was found by a man on a beach in Ireland.

The photo of the washed up creature was posted on Reddit last week by the person who found it. “Can anyone help me identify this sea creature? Just found it washed up on a beach in Ireland,” he said in his post.

Soon, responses started trickling in on the post from people who were keen to offer advice.

“Needle fish, was a needle fish. Those things stink like all get out when they're alive,” said a Redditor.

Some responses were, however, laughable, with a Redditor joking it's a “forbidden churro”. He was comparing the creature to the long, deep-fried snack due to its elongated and ridged body.

One said it could be "Goa'uld", a race of sentient parasitic beings from sci-fi series Stargate SG-1. Another called it the “jörmungadr”, a sea serpent in the Norse mythology popularised by the ‘God of War' franchise.

Some users suggested it may not be a creature at all, but rather a part of it like a “sea scorpion's tail”.

“I wonder if this wasn't attached to a sting ray,” a user commented.

Meanwhile, the person who first found the strange creature accepted the response given by one Redditor who said it could be “greater pipefish (Syngnathus acus)”.

“You're right! Just looked that up and it looks identical. Thanks for your help. I don't know much about marine biology and really appreciate it,” said the person who poriginally posted the photo.

According to Encyclopedia Britannica, pipefish belongs to a sub-species of small fish which are closely related to both seahorses and seadragons.