Mysterious Black Ring Seen Over Lahore In Viral Video. It Could Be...

The black ring of smoke left a slew of conspiracy theories in its wake. 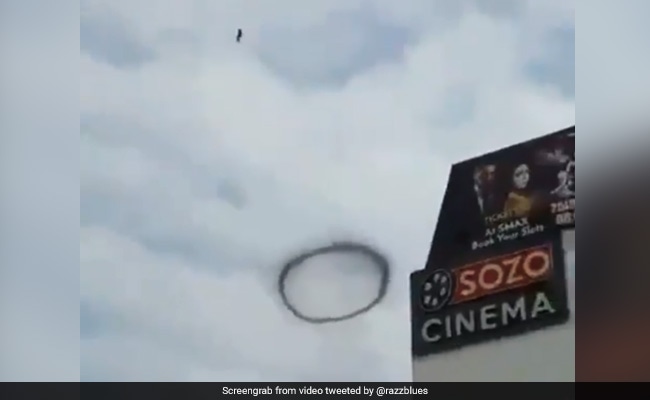 An O-shaped black cloud was seen in the sky above Lahore recently.

A mysterious black ring of smoke was seen in the sky above Lahore in Pakistan recently. The O-shaped cloud floating over Lahore left a slew of conspiracy theories in its wake as residents and social media users tried to figure out what it could be.

A video posted on Twitter on Monday shows the huge black ring slowly rising up in the sky, leaving viewers stunned. Some speculated that it could have been caused by an alien spaceship, while others wondered if it was a portal to another dimension.

Watch the spectacle that left many bewildered:

The video has been viewed over 37,000 times since it was shared online. It left a number of Twitter users convinced that there was something otherworldly about the black ring. Some others shared videos of similar black rings appearing in the sky at other parts of the world.

I noticed a similar thing some weeks ago in Dubai pic.twitter.com/qGl6xhgMtk

There is, however, a reasonable explanation for the strange phenomenon. According to The Sun, the black smoke ring could have been caused by an industrial fault on the ground.

The smoke vortice was likely created by a small combustion of explosion - or a blast through a circular structure. Such circular smoke vortices have appeared several times before. In 2014, for example, the mysterious black ring in the sky over Leamington Spa in UK was eventually traced to a fireworks test.

NBC News reports that a nearly identical smoke ring was also spotted over Chicago in 2012. It appeared due to an electrical transformer that blew up.