A local captured the constable in a video and posted it on Facebook. Since being posted three days ago, the video has over 1.2 million views. 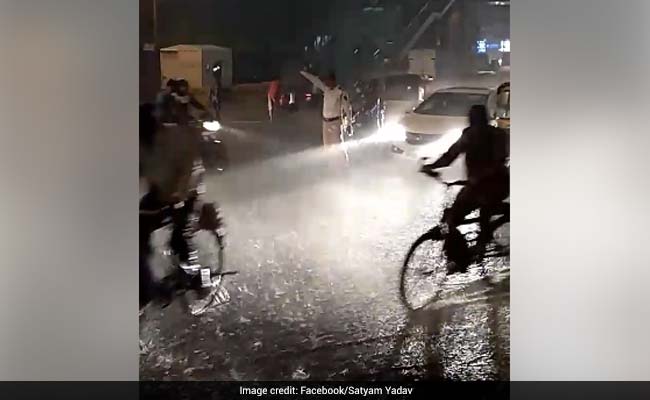 New Delhi: Thanks to a massively viral video, a Mumbai cop is being applauded on social media for managing traffic on a busy road while standing in heavy rain.

Mumbai-resident Satyam Yadav was heading to Kandivali East station on Monday evening when it suddenly began pouring. To take refuge from the rain, the Mumbaikar took shelter under a subway near an intersection in Akurli Road. As traffic choked with the sudden downpour, a traffic constable appeared to ease the situation, Mr Yadav told NDTV. Without a raincoat or umbrella, the policeman managed traffic at the busy intersection while standing under heavy rain.

"The traffic was running normally but because of the sudden rain, there was complete chaos. People started running here and there. I don't know where this man came from and he started clearing traffic with great enthusiasm. He was showing the way to pedestrians, two-wheelers," Mr Yadav told NDTV. "He was doing his job with great enthusiasm."

Mr Yadav captured the constable in a video and posted it on Facebook. Since being posted three days ago, the video has over 1.2 million views.

"I was standing under the subway and I saw this policeman clearing traffic under heavy rainfall. So, I thought to shoot the video and post it on social media... I had no clue this will be such a viral video," he said.

Mr Yadav said he stood under the subway for 20 minutes till rain stopped. The constable, he said, stood there doing his job despite the traffic situation having improved.

"He was just there. I have another clip where the traffic is clear and he is still standing under the rainfall," he said.

The dedicated cop from the viral video was later identified as 47-year-old Nandkumar Ingle, a traffic constable with Dahisar traffic division, reported Mid-day.

Recounting the night, the constable said that though he was carrying an umbrella and raincoat, there was no time to put it on as his priority was to clear traffic as soon as possible.

"Vehicular traffic was increasing, and I couldn't afford to waste a single minute. From 7 pm till 11 pm, I was at that spot clearing traffic; I don't even know when this clip was captured," he recalled.

At 11.30pm, the constable said he went home completely soaked unaware he was being filmed.

The constable, who has worked for Mumbai police for 23 years, said he had no idea the video was viral until a colleague told him about it the next day. "I come from a farmer's family and have working in pounding rain is not new to me," he told The Times of India.

Mr Ingle's phone hasn't stopped ringing since the video went viral on Facebook and WhatsApp, the newspaper reported. Congratulations have been pouring in from colleagues and relatives alike.

The constable was felicitated by Assistant Police Commissioner (North) Shakuntala Mistry for his exemplary effort.

According to the Met Department, Monday's rain was pre-monsoon showers. Monsoon is expected to reach Mumbai in two to three days, the department said.Click for more trending news