Amazon isn't allowing the man to return the smartphone because the company's return policy doesn't allow it. The order - the mouthwash - fell under consumable products. 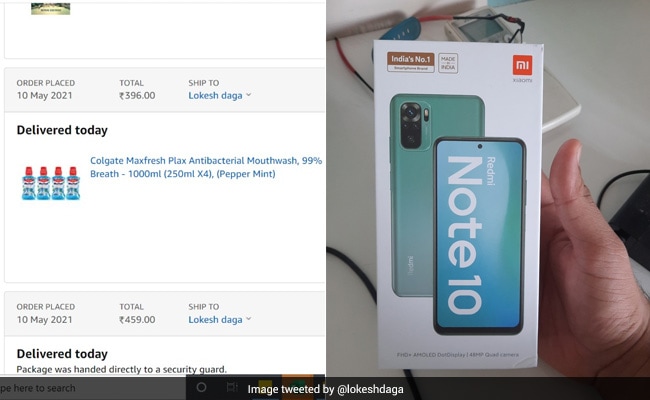 The man said Amazon mistakenly delivered him a Redmi Note 4.

A Mumbai-based co-founder of a travel luggage company has said Amazon India delivered him a smartphone when he had ordered only a mouthwash. Lokesh Daga said the package label on the delivered item was in his name but the invoice was in somebody else's. He said Amazon mistakenly delivered him a Redmi Note 4 and he has raised the issue with them through an email as well to get the smartphone sent its actual owner. However, the e-commerce giant isn't allowing Mr Daga to return the smartphone because the company's return policy doesn't allow it. Mr Daga's order - the mouthwash - fell under consumable products.

Hello @amazonIN Ordered a colgate mouth wash via ORDER # 406-9391383-4717957 and instead of that got a @RedmiIndia note 10. Since mouth was in a consumable product returns are restricted and am unable to request for return via the app(1/2) pic.twitter.com/nPYGgBGNSR

Mr Daga's Twitter profile says he is the co-founder of Nasher Miles, a manufacturer of luggage bags and accessories. His tweet has received several interesting responses.

One user said he should keep the smartphone and order the mouthwash from a neighbourhood store, while another asked Mr Daga to give the smartphone to him.

Dont worry , I need a phone please give it to me..then i will order two mouthwash for you..you happy and i will also happy.. 😀😀

To the latter, Mr Daga said "nice try" but wondered what would happen to the person who ordered a smartphone and probably received a mouthwash.

Haha! Nice try:) what about the person who genuinely ordered the phone and probably got a mouthwash? Hope he gets a solution from @amazonIN

The incident is being widely discussed on Twitter. Most people are sharing hilarious memes about it. Check out some of them below:

Feeling sad for the guy who received mouthwash instead phone!
🤣 pic.twitter.com/3dT9spryph

Guy who received mouthwash instead of phone. pic.twitter.com/TRMQwZbGp7

A Twitter user criticised Amazon India for its irresponsible service to Mr Daga, and cited his own example when his order was misplaced.

This seller of Amazon do goof up like it, in October it sent me a body spary of rs 199 instead of rs 8000 worth of redmi 9 mobile. And @amazonIN decline to offer me replacement. And i hot duped. Karma of darshita seller

In June 2020, a man said on Twitter that he ordered a skin lotion on Amazon for Rs 300, but received Bose headphones worth nearly Rs 19,000. Gautam Rege, the co-founder and director of Josh Software, said when he contacted Amazon to return the package, he was told to keep the premium headphones as the item was "non-returnable".

What do you think of the goof-up? Tell us in the comments section below.