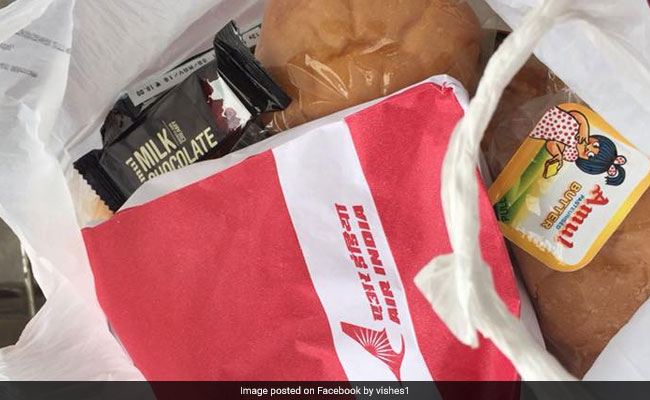 He collected about 70 burger buns, 50 butter pockets and 30 chocolates

A Mumbai man said he decided to do something about the food he saw often being wasted during flights. In a viral post on Facebook, Vishab Mehta detailed how he collected uneaten food during a recent flight and then offered it to those in need. His post, since being shared on June 21, has collected over 49,000 reactions and more than 23,000 shares - and still counting.

"I was flying to Jaipur from Mumbai and I had decided that I'm going to do this this time," Mr Mehta told NDTV. In his post he explained that passengers often leave food served on flights untouched and it usually ends up in garbage.

"I decided that I'm not gonna let any uneaten food to be wasted or dumped into the garbage. Rather, I'll collect it and feed that food to the hungry," he wrote.

According to the post, the passenger requested the cabin crew of the Air India flight for a bag to collect the uneaten food. "The crew was very supportive and suggested me to be seated and that it's better if they collected it while taking their food-trays back, separating the uneaten food in a bag simultaneously," he wrote on Facebook.

Mr Mehta said they managed to collect about 70 burger buns, 50 butter pockets and 30 chocolates. He told NDTV he distributed the food while travelling to Ajmer from Jaipur.

Urging others not to waste, he wrote, "It's a request to all, save food and feed the hungry!"

Promoted
Listen to the latest songs, only on JioSaavn.com
"Fabulous! Really commendable and what a noble thought," says one Facebook user. "More power to you and the wonderful act of kindness. Completely inspired by it," says another.

NDTV has reached out to Air India for a comment.Click for more trending news