Many people commented they were not aware that monkeys take baths until they saw the video. 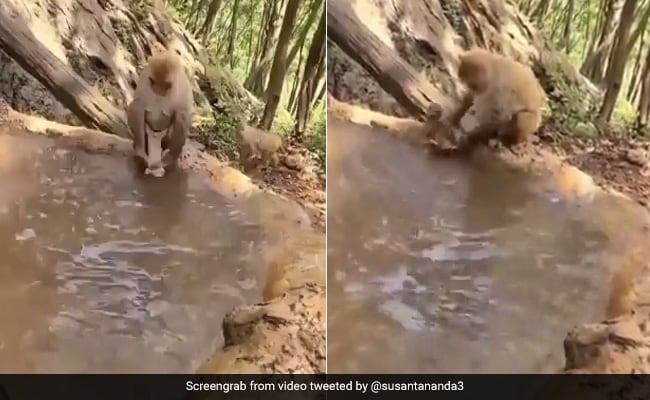 A monkey was filmed giving a bath to its baby in a viral video.

A video is now going viral on social media that shows how a mama monkey is making its child take a bath in what appears to be a small pond. It shows how children -- whether human or animal – are no different in throwing tantrums and their parents know exactly how to handle them. The video shows the mama monkey holding its baby by the legs and suspending the upper part of its body underwater and then splashing water over its body. The baby resists and tries repeatedly to escape the mother's hold but, for its own good, it fails every time.

The 18-second clip has been shared by Indian Forest Service officer Susanta Nanda, who said, “This is the way mothers teach their kids that no one else can take a bath for you.”

This is the way mother teaches their kid that no one else can take a bath for you... pic.twitter.com/bMko4N4hXk

There were several monkeys near the pond, the video showed. They could be either playing or ensuring a ring of protection around the mother-baby duo in the forest area.

One user suggested that the mother was teaching the child how to bathe.

mother is the first teacher of their children

Another user said many Indian mothers do the same to their child and it's a common sight in south India.

Many Indian mothers give a similar type of bath by placing the infant between their legs ( spread straight) .In South India it is very common.

Some people had assumed monkeys did not bathe. For them, the video proved to be informative.

First time i am seeing such a lovely moments

Others felt motherhood is difficult across species.

Motherhood is tough across species.

Another user said the wildlife is full of excitement.

Wild life is full of excitement!

The IFS officer regularly posts videos and other updates about the wildlife. Recently, he shared a clip of a caterpillar, often known as a natural engineer because of its skills, building a tent out of a leaf for itself.

Shared by Times for knowledge

The video has got more than 11,000 views. It showed the caterpillar eating the leaf in the shade of the tent it built with incredible accuracy.