Meet Narwhal, The Puppy Born With An Extra Tail On His Head 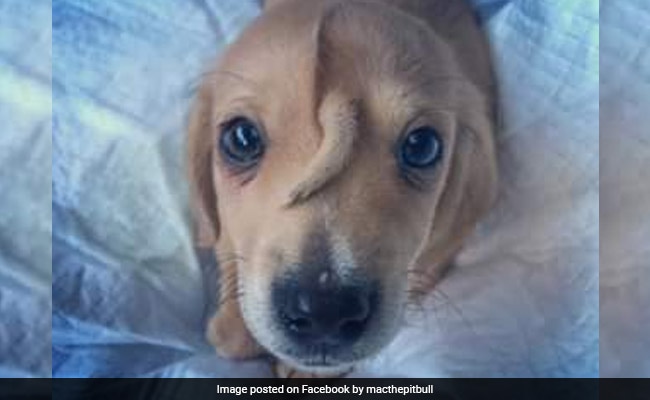 Narwhal the puppy was born with an extra tail on his forehead.

A 10-week-old abandoned puppy, with an extra tail growing out of his head, has been rescued in Missouri, USA. Mac's Mission is a nonprofit rescue that predominantly works with animals with special needs. Their latest rescue has become a viral Internet sensation.

Named Narwhal the Little Magical Furry Unicorn  - or Narwhal, for short - the puppy was found "in rural Missouri" with a larger dog on Friday and brought to Mac's Mission on Saturday, reports USA Today. He was found with an extra tail growing out of his forehead and a foot injury. "So far the tail in his forehead does not wag that we have seen," wrote Mac's Mission on Facebook.

Pictures and videos of Narwhal the puppy have gone viral on social media and also helped raise awareness of the rescue centre's work.

Rochelle Steffen, who runs Mac's Mission, told BBC that the puppy "is in no pain and plays for hours". One adorable video, shared on Facebook, shows the Narwhal happily prancing around and nibbling a rescue worker's finger playfully.

Ms Steffen took Narwhal to Cape Small Animal Clinic to be examined, where the veterinarian said he had never seen a puppy like Narwhal in his 16 years of experience. He told USA Today that the extra tail is likely a congenital defect.

According to BBC, Mac's Mission has been told that there is "no medical need to remove" the extra tail as it causes him no pain. However, Narwhal is not yet up for adoption, as the staff want him to "grow a bit more and truly make sure the tail doesn't become a bother or a problem".

Comments
puppy with extra tailpuppy with tail on headNarwhal the puppy