Read inOther Languages
This Article is From Jun 22, 2020

Meet "Milkshake", One Of Less Than 100 Pugs In The World With Pinkish Fur 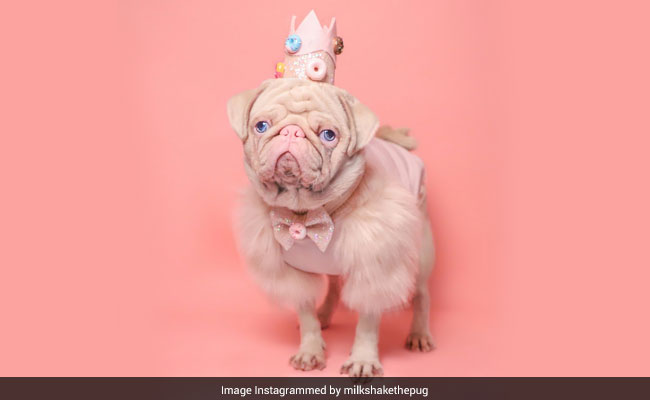 Milkshake the pug is an Instagram sensation - and not just for his envy-inducing luxurious lifestyle. He is one of less than 100 pugs in the world with pinkish fur, according to Bored Panda. The 17-month-old puppy is stealing hearts on social media with his piercing blue eyes and unique colouring, which is a result of albino ancestors.

Milkshake was born with a pink nose and bluish-pink fur that makes him stand out from the crowd, and has earned him thousands of dedicated followers on Instagram.

His owner, Maria, knew she had to adopt him when she saw the pink pup among his brothers and sisters. "I had never even heard of pink pugs before, but when I went to the breeder and spotted Milkshake I thought he was adorable, and knew I had to have him," the 33-year-old from London was quoted as saying by Unilad.

"They're very rare. At the time, I think Milkshake was one of 30 in the world but there have been a few litters. There's no more than 100 worldwide."

Milkshake has more than 88,000 followers on Instagram, where his pictures collect thousands of 'likes' and comments each.

His owner describes him as a "very spoiled" but happy-go-lucky dog. He is often seen dressed up in fancy clothes and accessories on Instagram.

Luckily, the lack of pigmentation does not cause any problems for the pug. "He's not actually albino - he just has the colouring so he doesn't suffer from any sight loss or hearing loss. He's a happy healthy boy," says Maria.

What do you think of Milkshake the pink pug? Let us know using the comments section.