Dr Moose Davis has "spent a career serving and supporting the university community." 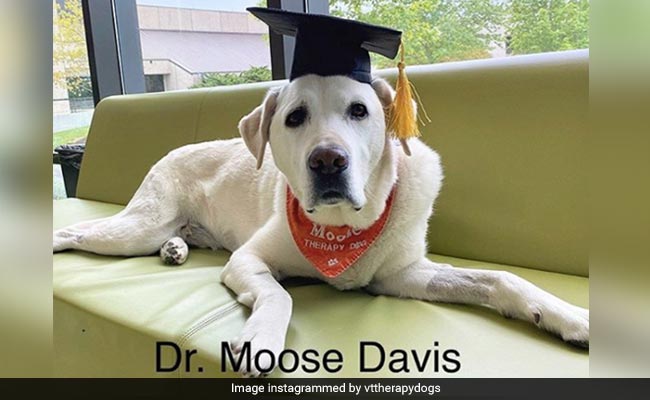 Therapy dog Moose is now Dr Moose, thanks to his honorary doctorate degree.

Virginia Tech has awarded an honorary doctorate degree to one of its most beloved staffers: a therapy dog named Moose. Like most other universities, USA's Virginia Tech celebrated the class of 2020 with a graduation ceremony conducted online amid the coronavirus pandemic. During the virtual commencement ceremony on Friday, eight-year-old Moose was awarded an honorary doctorate in veterinary medicine.

In a statement released online, the university said it was recognising the work of Dr Moose Davis, who has "spent a career serving and supporting the university community."

The Labrador Retriever has been with the university since 2014 and is one of four dogs serving at the Cook Counseling Center.

"The students here talk a lot about how Moose has broken down the stigma around mental health care on campus," owner Trent Davis, a counselor and coordinator of the university's Animal-Assisted Therapy program, told CNN. "Veterinarians are unfortunately a very challenged population. They have high rates of suicide, and this profession can be quite disturbing. He has really helped the students and staff at Virginia Tech and has gotten a lot of recognition for that."

Dr Moose has been helping students and staff despite his own health problems - he was recently diagnosed with prostate cancer, for which he has undergone radiation, chemotherapy, and other therapies. His treatment is ongoing but he remains his usual cheerful self, said Moose's owner.

Moose has aided in more than 7,500 counseling sessions and over 500 outreach events in his six years at Virginia Tech. When he is not at work, the pooch enjoys swimming, snacking and playing tug-of-war.

"Parallel Universe," Says Blogger Isolating On One Of World's Most Remote Islands