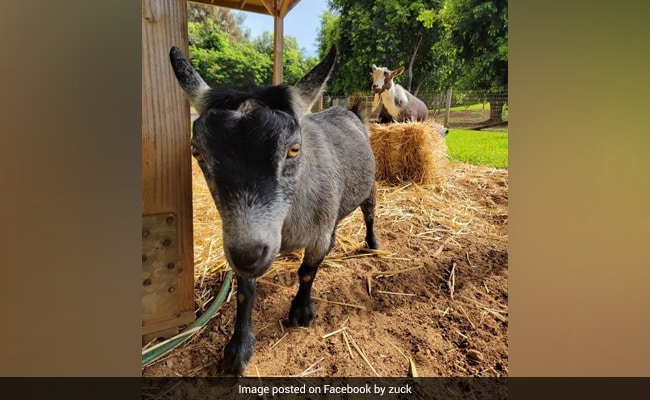 Mark Zuckerberg shared a picture of his pet goats - Max and Bitcoin - on Facebook.

Mark Zuckerberg shared a picture of his pet goats on Monday, introducing them to the world as Bitcoin and Max. The picture quickly set social media abuzz with speculation about the significance of the name "Bitcoin". Bitcoin investors took it as an endorsement of the cryptocurrency from the Facebook founder, while meme-makers took the opportunity and flooded social media with hilarious memes.

Mark Zuckerberg's own post was pretty straightforward. "My goats: Max and Bitcoin," he wrote while sharing the picture on Facebook yesterday.

Since being shared online, the post has racked up more than 9 lakh reactions and almost 2 lakh comments on the platform.

"Which one is Bitcoin?" asked one Facebook user, while another wondered if Mr Zuckerberg would sell Bitcoin to him.

The picture quickly made its way to Twitter as well, where reactions varied from amused to curious about the significance of the name. The post has sparked speculation that Facebook will invest in Bitcoin, just like Elon Musk's Tesla.

Anthony Scaramucci, the founder of SkyBridge Capital, tweeted to say that Mark Zuckerberg had hired David Marcus from PayPal to run Facebook's crypto business - which he took to be a sign that Mr Zuckerberg would become a Bitcoin buyer.

I knew Mark Zuckerberg would become a #Bitcoin-er when he hired David Marcus from PayPal to run @Facebook's crypto business. It's been a long and winding road, but welcome to #Bitcoin. Great job Zuck and David. Excited for what comes next.

"Is Mark Zuckerberg telling us he is a bitcoin maximalist with the names of his goats?" asked  Anthony Pompliano, a crypto investor.

Is Mark Zuckerberg telling us he is a bitcoin maximalist with the names of his goats? ???? pic.twitter.com/GKlMdqdeXJ

Another Twitter user wondered whether it was the "Ultimate top signal".

Facebook's shareholders meeting is in 2 weeks

Guess what happens next... pic.twitter.com/Mm1AxtjDfP

According to trading news website Benzinga, Bitcoin is yet to see a trading frenzy following Mr Zuckerberg's post. It is currently trading at $55,315.

Anand Mahindra Says Stay Away From Twitter If You Do This...