Man Walks Around In Giant Plastic Bubble Amid Pandemic. Watch

"The man is singing, I'm the man in the bubble!" wrote the onlooker who shared the video. 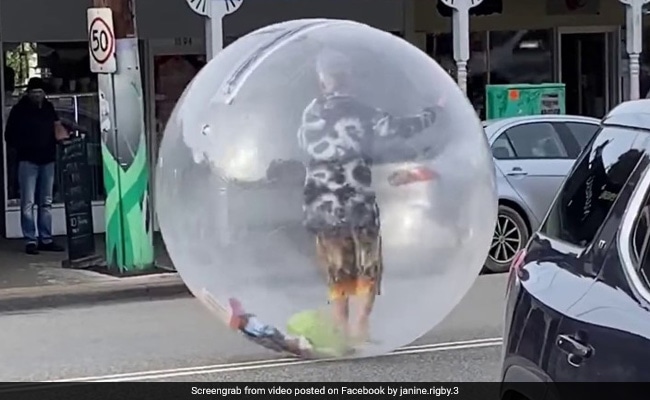 A man in Australia was filmed walking around in a giant plastic bubble.

This man is not taking any chances. An amusing sight was recently captured on camera in Australia and has left thousands of people across the world in splits. A video, filmed in the suburb of Belgrave near Melbourne, shows a man walking around in a giant plastic bubble amid the coronavirus pandemic.

This bubble is only the latest in the long line of weird things that people have been using to minimise human contact and maintain social distancing amid the pandemic.

The video was shared on Facebook this Friday by onlooker Janine Rigby, who thanked the man for spreading a bit of cheer in difficult times. It shows the man wandering the streets in his bizarre protective gear and singing "I'm the man in the bubble!"

"The man is singing, I'm the man in the bubble! Thank you to this man for making us smile," wrote Ms Rigby while sharing the clip. Take a look at it below:

Since being shared online, the video has collected over 1.6 lakh views and hundreds of amused comments.

"This is better protection than a mask," joked one person in the comments section.

"Hahaha unreal," another remarked, while a third viewer added: "That's what I'm doing next. It's so funny."

This is not the only video of people in bizarre protective coverings. Another that was shared on Facebook this Sunday shows a man wearing a cone that is generally meant for animals.

Meanwhile, in March, a man in Italy was spotted wearing a huge cardboard disc to keep people away.