Not the first oddity spotted on China's roads 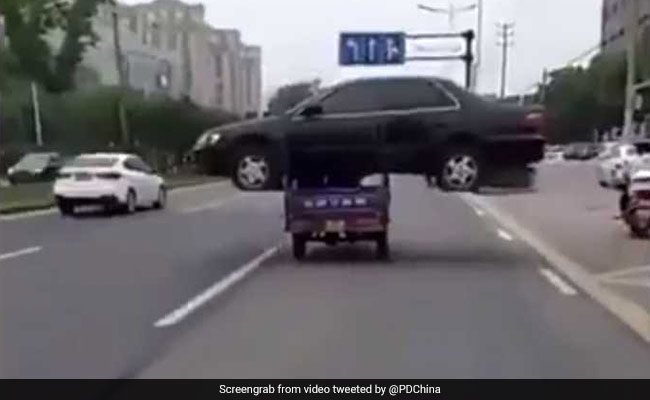 The video shows a black sedan, loaded horizontally, on top of the three-wheeler.

In today's edition of "Wait, what's that on the street?" a car was filmed being transported on top of a motorized three-wheeler in China. A video circulating on Chinese social media show the bizarre sight that has left several surprised.

Promoted
Listen to the latest songs, only on JioSaavn.com
Posted on Twitter by People's Daily, China, the video shows a black sedan, loaded horizontally, on top of the three-wheeler. Before you wonder what the car was doing piggy-backing on another vehicle, it is reported the car was pretty run down. According to Shanghaiist, the car had been bought by the three-wheeler driver for 800 yuan (approximately Rs 8,300) and he was on his way to a junkyard to sell it off for its parts. However, the driver may have found himself on the other end of a raw deal because police fined him 1,300 yuan (approximately Rs 13,500).

Reckless driver on road! A man carries a car on his tricycle in southeast China's Zhejiang Province pic.twitter.com/NcVyFLgLl5

This isn't the first oddity spotted on China's roads. In Guiyang city of China's Guizhou province, a woman landed herself in trouble for driving a tiny bumper car on a busy street. A video of the strange incident went viral in China after it made its way online.Click for more trending news