Watch: Man Sacrifices His Car To Save Unconscious Driver

The incident was recorded on the dashcam of another vehicle. 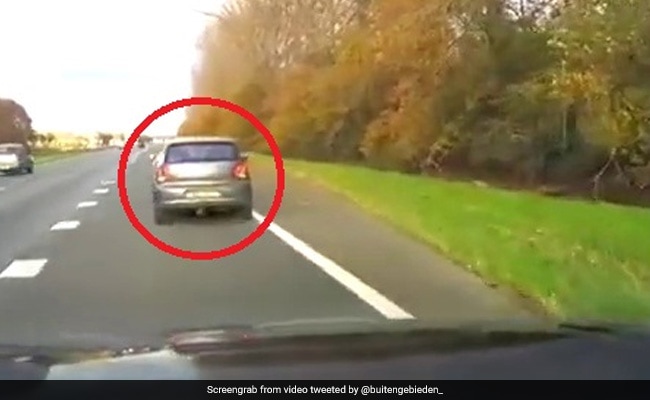 A woman fell unconscious while driving her car in Nunspeet, Netherlands.

We all have known that car accidents, especially collisions, can be life-threatening. But what if we told you that a collision between two cars could save a life? You wouldn't believe it until you saw this video. A man in the Netherlands sacrificed his car to save the life of an unconscious driver who had lost control of her car. The video shows a car, which looks like it's out of control, moving at a steady speed on a grass patch next a highway. Though the car bumps into the guardrail, it continues to move.

Soon, we see another car driving in front of it and stopping it by letting it bump against its rear. The incident was recorded on the dashcam of a car moving behind these two cars. The video was captioned, “Man sacrifices his car to save another driver who was unconscious.”

Man sacrifices his car to save another driver who was unconscious..

At the time of writing, the post had been viewed 7.15 lakh times. Over 20,000 users had liked it. The user also shared the way the entire incident unfolded through a thread on Twitter. The incident took place in Nunspeet on Friday afternoon when one Henry Temmermans noticed a car moving wildly during his drive back home.

NUNSPEET - It is Friday afternoon when Henry Temmermans from Nunspeet is on his way home on the A28. He still has some Teams meetings to go through, but otherwise only the weekend awaits him. Until he sees a car driving in the grass next to him on the highway.

“What I saw was not good. It was clear that the lady was no longer conscious,” said Mr Temmermans.

"I didn't hesitate for a moment. I had to do something." He can look inside the driver through his side window, he tells Omroep Gelderland. "What I saw was not good. It was clear that the lady was no longer conscious." The car won't come to a stop, so Henry has to think quickly"

Mr Temmermans, then, gets ahead of the car and lets the woman crash into the back of his car so that her vehicle comes to a stop.

He gives some extra gas to end up in front of the car. "I saw that the guardrail wouldn't stop her." Watch Henry's heroic performance:

His plan succeeds: the woman crashes into the back of his car and comes to a stop.

Mr Temmermans sees that the woman had vomited and tries to make her come around. He also calls an emergency number. The cops arrive after about some time and tow away Mr Temmermans' car.

Behind him, another motorist helps, who managed to record the entire incident via a dashcam. "We both got out immediately. He called 112 and then we looked in the car together." 'Wake up' Inside the car, the female driver is still unconscious.

Together they wait for the ambulance and police who arrive after about ten minutes. "Then I transferred it." His car has to be towed away: it can no longer be driven. "The other driver took me home.

“The woman is left with five broken ribs from the incident,” read one of the tweets in the thread, adding that it wasn't clear how she became unwell to the extent that she fell unconscious.

The woman is left with five broken ribs from the incident. It is still not clear how she became unwell. Henry had no hesitation in taking action, he says. "I see it on social media. People say they are proud of me, call me a hero.

Many users commented on the thread, admiring Mr Temmermans for the way he saved the woman's life.

I always admire these kind of people who will risk their lives to help others who are in danger while most of us will keep on going where we are going. They are special, kind and brave… ????

There was one user who had “a seizure while driving”, and, as a result, the car “went into a pond”. The person thanked other motorists for calling 911, and added that such “helpers are the heroes”.

This made me cry. I had a seizure while driving - luckily only I was injured and my car went into a pond but if it hadn't been for other motorists calling 911, I would have drowned that night. The helpers are the heroes.

I did like to think everyone would put life ahead of a damaged car. This happened to my dad and if not for a postal worker driving he'd of died from the heart attack he had. She administered CPR as well. People think their rights are being taken away but it's their humanity

This man was actually a hero because not many people, injured or sick, on roads, get assistance. Many passers-by, who should have been first responders, remain mute spectators to victims of road crashes.