Man Refuses To Give Up Phone, Smokes Calmly During Armed Robbery. Watch

"I just had a really good feeling he wasn't out to harm anybody he just wanted drug money," says Tony Tovar 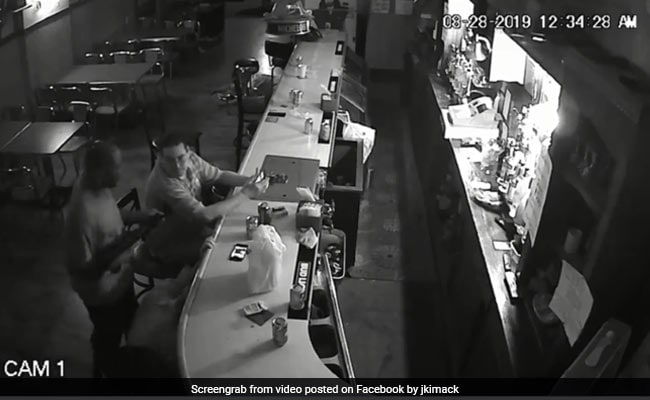 Tony Tovar refused to give up his phone, even with a gun pointed at him.

On Wednesday, August 28, an armed robber entered a bar in St Louis, USA, and held up the entire establishment on gunpoint. Surveillance footage from the incident at Behrmann's Tavern shows customers fleeing, hiding under chairs or hitting the ground - all except one man.

Tony Tovar was at the bar when the gunman entered, reports NBC News, and he remained totally unfazed. In fact, as the robber, later identified as Kevin Moore, tried to snatch his phone with the gun pointed at him, Mr Tovar refused to comply.

"I said not another punk trying to pull a punk move," Mr Tovar said to KSDK. "I'm so tired of people in South City thinking they can control people because they wanna muscle their way in with firearms or attitudes or some sort of aggression."

Surveillance footage which has gone viral online shows Mr Tovar calmly sitting at the bar as the gunman robs the place. He even lights up a cigarette and smokes calmly.

The video was shared on Facebook by John Kimack, where it has collected over 89,000 views and more than 3,000 'shares'. Take a look at it below:

"I wasn't really concerned," Mr Tovar said to KSDK. "I just had a really good feeling he wasn't out to harm anybody he just wanted drug money."

Nobody was injured in the incident.

Fox News reports that the robber, 37-year-old Kevin Moore, was arrested on Tuesday. He had managed to flee Behrmann's Tavern with about $300 and a cellphone. He has now been charged with four counts of robbery and armed criminal action.