Man Marries Himself After Fiancee Breaks Up With Him 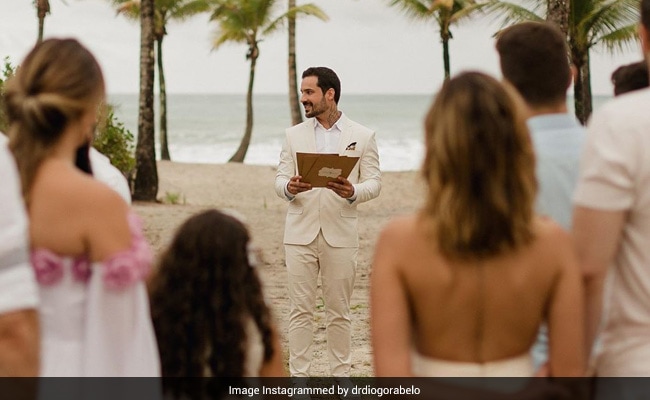 Diogo Rabelo married himself in an elaborate ceremony in Brazil.

A man in Brazil has married himself in an elaborate ceremony after his fiancee broke up with him. According to local reports, doctors Diogo Rabelo and Vitor Bueno got engaged in November last year and had set a wedding date for last month.

However, in July, Ms Bueno decided to call off the relationship after a series of arguments over the summer.

While such a situation would typically mean the cancellation of the planned wedding party, Diogo Rabelo decided he would go ahead with the wedding as planned. The 33-year-old decided to marry himself, reports Ladbible.

Mr Rabelo hosted a fancy wedding party on October 17 at a luxury resort in Itacare, in the northeastern state of Bahia. Only about 40 people attended the unusual ceremony amid the coronavirus pandemic, but the doctor described it as one of the happiest days of his life.

"Today is one of the happiest days of my life, since I am with the people I love the most in this life, celebrating what could be a tragedy, but I turned it into a comedy," he said.

Photos shared on Instagram show him celebrating his wedding with close friends and family members.

In one post, he thanked all the people whose support helped him overcome a low phase of his life. In another, he thanked his ex-girlfriend and wished her well. "I respect you... I want you to be free to go where you want and to stay where you want," he wrote.