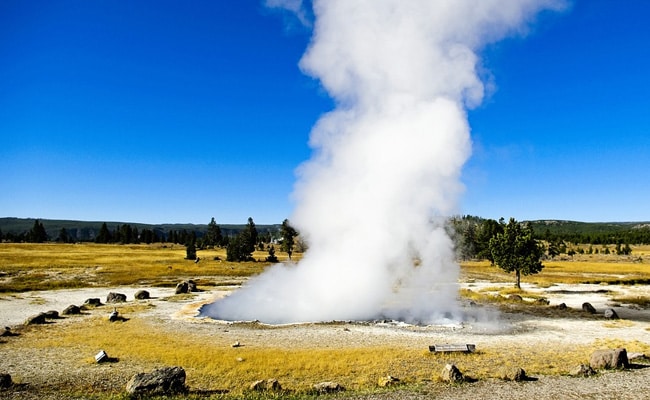 A man has been banned from USA's Yellowstone National Park for trying to cook chicken in a hot spring. Park rangers were alerted to the incident on August 7 when they received reports about a group hiking toward Shoshone Geyser Basin with cooking pots, reports East Idaho News.

A ranger approached the group and discovered two whole chickens in a burlap sack sitting in a hot spring with a cooking pot nearby.

A man from Idaho, who was part of the group of 10, was cited for foot travel in a thermal area. He was also ordered to appear in a Mammoth Hot Springs court.

According to Fox News, after pleading guilty to charges on September 10, he was sentenced to two years' unsupervised probation and two $600 fines. During this time, he is not allowed to visit the national park.

According to the US National Park Service, burns from thermal features are a common cause of serious injury and death in the park. Safety regulations prohibit visitors from straying from boardwalks or maintained trails near Yellowstone's thermal areas.

"For your safety and for the protection of thermal features in Yellowstone, it is illegal to swim or bathe in any water that is entirely of thermal origin. Hot springs contain algae, bacteria, and fungi found nowhere else in the world: soaking or wading in springs can destroy these life forms," the park states.

"Throwing objects like rocks or sticks into thermal features is prohibited since doing so can clog vents and alter the flow and temperature of the water. Food and smoking are not allowed in thermal areas."