Lamborghini Goes Airborne After Being Hit By Another SUV, Catches Fire As It Lands

Occupants of the Lamborghini left the scene following the accident and the driver of the second vehicle suffered only minor injuries. 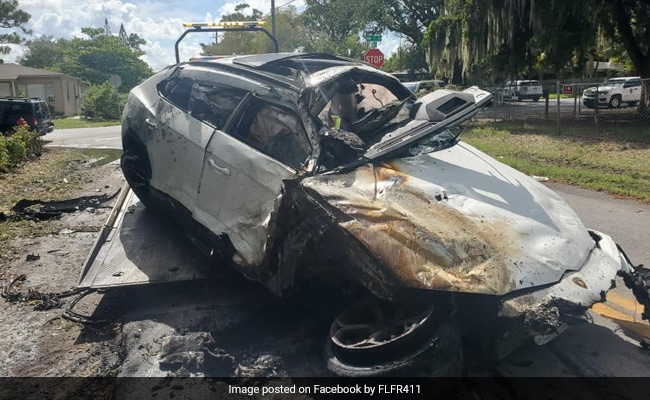 No one inside the house where the Lamborghini landed was injured.

In a chilling incident, a Lamborghini SUV in the US landed on the roof of a house after a crash, slid off and burst into flames before the driver fled the scene.

Taking to Facebook, the Fort Lauderdale Fire Rescue in Florida posted several images of the damaged vehicle and informed that the incident took place on Sunday. “During a firefighter's career there are certain calls that will never be forgetten. Today was one of those days!” the caption of the post read.

Speaking to local media outlet WSVN, Fort Lauderdale Fire Rescue Assistant Chief Timothy Heiser informed that the Lamborghini SUV crashed into another vehicle and “flew through the air about maybe 20 to 30 feet, landed on the roof of the house, hit the tree, and fell to the ground and burst into flames”.

The images shared by the department showed several different views of the incident, with one even capturing the white Lamborghini Urus upside down as fire officials extinguished the flames. Another picture showed the SUV flipped over with widespread damage. A third showed the roof of the house on which the car landed and eventually fell off.

“The occupants of the Lamborghini left the scene prior to our crews arrival and the driver of a second vehicle involved in the accident suffered only minor injuries,” the social media post read.

Further, the officials said that no one inside the house where the Lamborghini landed was injured during the horrifying incident. However, the residence had to be vacated due to the extent of the damage, they added.

Meanwhile, since being shared, the post by the fire rescue department has left internet users stunned. While several users called the incident “awful”, others wrote, “Insanity.. glad no one was injured but”. One user wrote, “That's crazy!” “Stupid is as Stupid does,” added second.