King Of Sweden Arrives In Delhi Carrying His Own Bags. Pic Wins Praise

"Very very inspirational and humbling to see the King and Queen of Sweden carry their own bags," wrote one Twitter user. 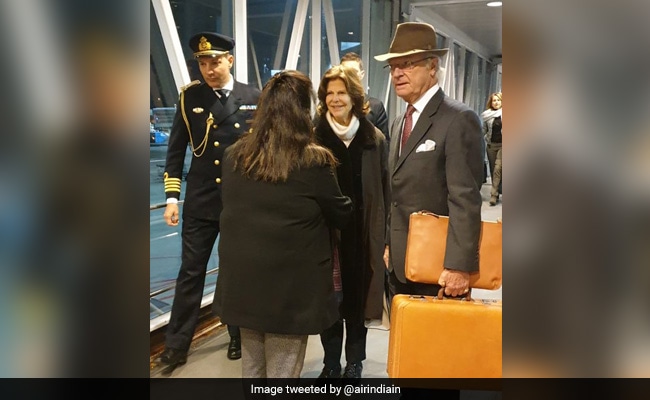 The king and queen of Sweden arrived in Delhi early today morning.

King Carl XVI Gustaf and Queen Silvia of Sweden arrived in Delhi this morning for a five-day visit. The royal couple flew in on an Air India plane from Stockholm, and the national carrier tweeted photos of them at the Delhi airport. Pics of the Swedish royal couple immediately went viral as people noticed that King Carl arrived carrying his own bags - a gesture that has won him a lot of praise on social media.

"His Majesty Carl Gustaf Folke Hubertus , King of Sweden and Her Majesty Silvia Renate Sommerlath travelled AI168 Stockholm to Delhi," wrote Air India on Twitter, sharing two pics of the royals being greeted at the airport.

The king of Sweden has been widely praised on Twitter for carrying his own bags at the airport - an action praised as "inspiring" and "humbling" by many.

Wow carrying his own luggage. No vip business. When do we learn from them and shed the babu culture?

Very very inspirational and humbling to see the King and Queen of Sweden carry their own bags on board. #Salutehttps://t.co/Qj7scmzJgQ

Royal Visit by a king and Queen and they carry their own bags!! This should be the new normal . They look like grand parents on a visit to the grandkids ☺️ https://t.co/qKwD2XL5xH

Twitter users also praised them for flying commercial instead of taking private jets.

Inspiring to see a king travel by a commercial service and that too of another country's airline. In these times of economic slowdown can India's leaders not demonstrate the same frugality?

They fly commercial and he carries his own luggage. https://t.co/zCbYGtVoMF

The Swedish royal couple, who arrived here early this morning, were accorded a ceremonial reception at the Rashtrapati Bhavan. In Delhi, the King and Queen visited Jama Masjid, Red Fort and Gandhi Smriti on Monday. The King also met with President Ram Nath Kovind on ways to further boost relations.

"My Pancreas Ate Itself": UK Man Admitted To Hospital After Chugging 12 Energy Drinks In 10 Minutes