Kerala Woman Stops Scooty In Front Of Bus, Refuses To Give Way. Then... 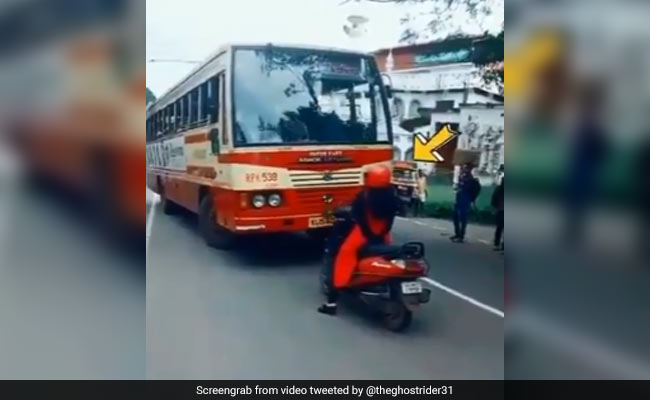 A viral video shows a woman stopping in front of a bus.

A video of a woman in Kerala stopping her scooty in the middle of a road has gone viral online and netizens can't seem to stop applauding her. The reason - she stood her ground and refused to give way to a bus driving in the wrong lane.

The viral video shows the woman standing on the right side of the road as the bus approaches from the opposite direction. She stands her ground and refuses to budge, ultimately forcing the bus to switch to the right lane.

According to Gulf News, the video was shot in Kerala. Many in the comments section of the video also confirmed that it was filmed in Kerala, citing the number plates of the vehicles.

It was posted to Twitter by @TheGhostRider31, who wrote: "When you are RIGHT it gives you a very different kind of MIGHT.

"See Joe a lady rider down South doesn't budge an inch to give in to an erring Bus Driver. Kudos to her."

When you are RIGHT it gives you a very different kind of MIGHT. See Joe a lady rider down South doesn't budge an inch to give in to an erring Bus Driver. Kudos to her. @TheBikerni@IndiaWima@UrvashiPatole@utterflea@anandmahindra@mishramugdha#GirlPower#BikerLife#BikerGirlpic.twitter.com/3RkkUr4XdG

The video has been viewed over 47,000 times since it was shared online earlier today. It has also raked up more than 4,000 'likes'. People in the comments section were full of praise for the woman.

Kudos to the lady