The woman's premier league football match was halted for almost 20 minutes as the kangaroo jumped fences, sprinted the length of the pitch and laid down in the penalty box 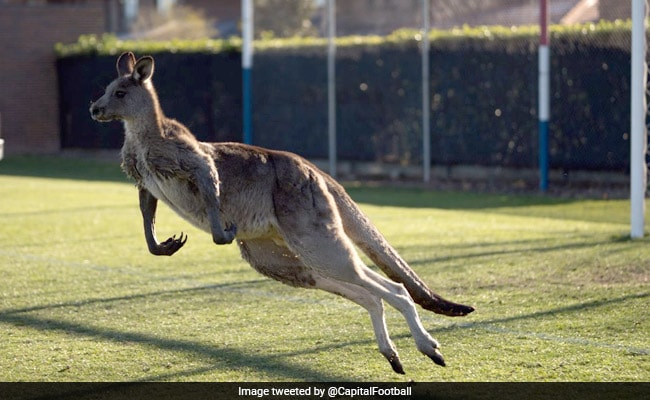 The woman's premier league football match on Sunday was halted for almost 20 minutes as the kangaroo jumped fences, sprinted the length of the pitch and laid down in the penalty box, reports Xinhua news agency.

Players, spectators and staff watched in amazement as the large great eastern kangaroo entered the field of play after half time in the National Premier League match between Canberra Football Club and Belconnen United Blue Devils in the Australian Capital Territory.

Now the kangaroo's antics have made headlines around the world after the video went viral on social media.

The footage was captured on a live stream for Australian broadcaster, Bar TV Sports.

A brief summary of why the second half was delayed today at Deakin, between @BLUE_DEVILSFC & @CanberraFC1 .
@BarTVsportspic.twitter.com/86mypdYf3B

While sightings of kangaroos in Canberra are rare, the authorities said it was unusual for the animal to find its way onto an enclosed oval and made it even more difficult to remove it.

Promoted
Listen to the latest songs, only on JioSaavn.com
After chasing the kangaroo on foot and gently rolling footballs towards it, ground staff slowly drove towards the creature in a van.

This fella was in no rush to let the second half of @BLUE_DEVILSFC v @CanberraFC1 get underway. #NPLW#Canberrapic.twitter.com/oPqiiCpnh5

The kangaroo, which entertained supporters by pretending to play goalkeeper, is believed to have leapt onto the playing arena from the stands in the exclusive Canberra suburb of Deakin.