"So you are telling me this is not the real music of the video and is just an edit?" asked one disbelieving Instagram user after watching Bollywood-BTS mashup. 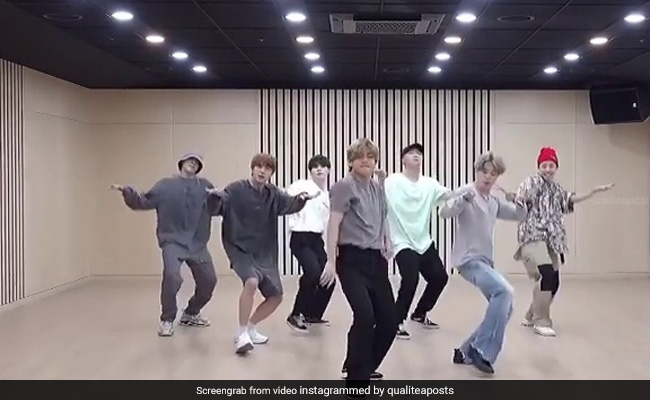 Members of BTS appear to shake a leg to a Bollywood hit in this mashup video.

Did K-pop sensation BTS actually dance to the hit Bollywood song Chadti Jawani? Well, no. But with this perfectly synced mashup, fans can pretend like they did. A video that has amused many on Instagram shows members of the beloved boy band appearing to groove to a remixed version of ChadtiJawani - a song from the 1971 film Caravan.

The mashup was shared by Instagram account '@qualiteaposts' one day ago, and has since garnered over 90,000 views and more than 800 amused comments.

In the mashup video, the seven members of the South Korean boy band are seen shaking a leg to ChadtiJawani. The original clip is actually from the group's dance practice to 'Dynamite'. For the mashup, it has been perfectly synced to the beats of ChadtiJawani, making it appear as if they are actually dancing to the Hindi song. Watch it below:

While the mashup's popularity continues to grow on Instagram, fans of BTS have flooded the comments section with amused as well as impressed reactions to the mashup.

"So you are telling me this is not the real music of the video and is just an edit?" asked one disbelieving Instagram user.

"How do you get the accurate song for such videos?" another questioned, while a third remarked, "Haha this is so good."

This is not the only BTS-Bollywood mashup that has won hearts on social media lately. In June,  mashup video of BTS dancing to the song ChunnariChunnari from the 1999 movie Biwi No 1 had also gone viral online.

BTS, also known as the Bangtan Boys, is a band that was formed in 2010 in Seoul. The group has since gained a global fandom with their award-winning music.