Videos shot by the local tourism association showed black rocks hurtling through the air, with skiers and snowboarders still on the slopes. 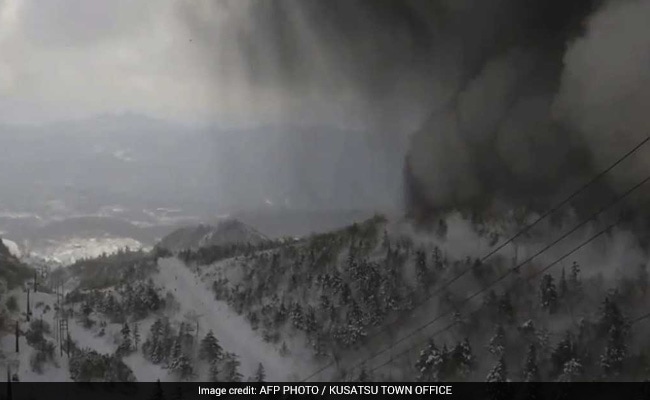 Mount Kusatsu-Shirane, erupted at 10 a.m., sending a huge plume of black smoke into the sky

Tokyo: A volcanic eruption Tuesday sent rocks raining down on a Japanese ski slope and triggered an avalanche that killed a soldier and injured at least a dozen others.

Mount Kusatsu-Shirane, an area about 120 miles north of Tokyo known for its ski slopes and hot springs, erupted at 10 a.m., sending a huge plume of black smoke into the sky.

Videos shot by the local tourism association showed black rocks hurtling through the air, with skiers and snowboarders still on the slopes.

"There was a huge boom then a big plume of black smoke in the sky," one skier told NHK, the public broadcaster. "I had no idea what was going on."

At least four people were hurt by falling rocks, while five were in a gondola when volcanic rocks smashed the windows.

"The gondola suddenly stopped, then the ash cloud hit so I thought there had been some kind of eruption nearby," said a snowboarder who had been in the gondola at the time. He was stuck inside for about 40 minutes before being rescued. "I was scared," he told NHK.

About 80 people were stuck at the ropeway station at the top of the slopes, unable to ski down because of the rocks and unable to go back down in the gondolas because the power went out. Some were brought down by helicopter and emergency workers helped the others to safety.

Rocks also crashed through the roof of a rest house where about 100 skiers and snowboarders were sheltering, the Kyodo News Agency reported.

About 30 minutes after the eruption, an avalanche came down the mountain, catching six soldiers with Japan's self-defense force, or military, who were part of a 30-strong contingent on a training exercise in the area.

One of the soldiers, a 49-year-old man, died from his injuries, Defense Minister Itsunori Onodera told reporters. Local police said two others had broken bones and were in critical condition.

Japan's Meteorological Agency has raised the volcanic alert level from one to three after the eruption, warning people not to come within a one-mile radius of the crater. A maximum alert level of five requires immediate evacuation.

Japan sits on the Pacific "Ring of Fire" and has 111 active volcanoes, as well as frequent earthquakes. Tuesday also witnessed another volcanic eruption in the Philippines, an earthquake in Jakarta, Indonesia, and another quake off the coast of Alaska.

The 7,000-foot-tall Mount Kusatsu-Shirane last erupted in 1983, according to the meteorological agency, which is responsible for monitoring volcanic activity.

The agency said there had been no warning signs for Tuesday's eruption.

Promoted
Listen to the latest songs, only on JioSaavn.com
In 2014, it was widely criticized for not providing any warning ahead of the 2014 eruption of Mount Ontake, about 125 miles west of Tokyo. The sudden eruption there killed 63 hikers and marked the first time in more than two decades that anyone had died as a result of a volcanic explosion.