Meet The Man Who Is Biking Around The World, With A Cat On His Back

"As soon as I got her to relax, that's when I decided to bring her with me," Nicholson said. 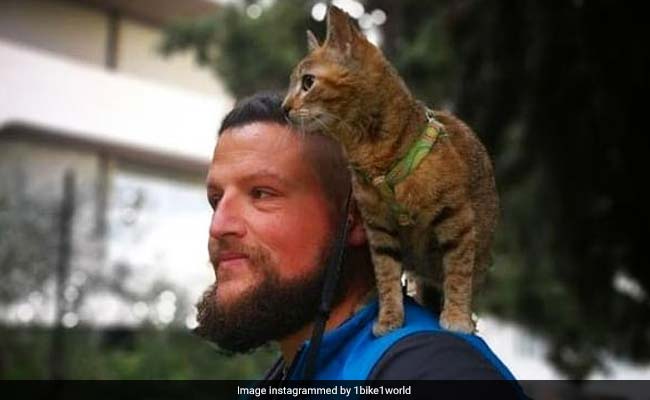 Dean Nicholson was pedaling up a hill in Bosnia, near the border of Montenegro, when he heard a plaintive meow.

He looked over his shoulder. In the lambent December light, he saw a gray-and-white kitten chasing him up the incline.

The burly and bearded 31-year-old itinerant, with a thick Scottish brogue and a Maori design inked on his left upper arm, pressed on his brakes and dismounted.

Nicholson had set out three months earlier from his home in Dunbar, a town on the eastern coast of Scotland, to traverse the world on his green Trek 920 bike. He cycled from Scotland to England, hopped on a ferry to the Netherlands, and then traveled through Belgium, France, Switzerland and down to Italy. From the coast of the Adriatic, he caught a ferry to Croatia and then made his way into Bosnia.

He was seeking distance from his job as a welder, which had left him listless and depleted.

"I couldn't do the 9-to-5 thing," he said in an interview with The Washington Post. "I wanted to see the world and see what state it's in."

That meant choosing a bike and the open air over a bus or train compartment. "Otherwise you miss out on the smaller towns," he explained.

And it meant going alone.

Or so he thought. The Balkans had a surprise in store for him, in the form of a feline and fellow traveler. He called her Nala, after the lioness friend in his favorite film, "The Lion King." The tiny animal, with eyes like jewels, wouldn't leave his side.

So began a second, not-so-solo leg of his round-the-world ride, as Nicholson and Nala took their place in the pantheon of epic duos melding man and beast, from Snowy and Tintin to Snoopy and Charlie Brown. Their journey became a sensation on social media this week. A video posted by the Dodo, an animal-centric website, had been viewed nearly 8 million times on Twitter by Thursday morning.

"If you've got a pet, you know what it's like," Nicholson said. "You're never alone. It's true companionship."

At first, Nicholson didn't know what to do with the desperate kitten on the side of the road. He was already carrying too much cargo. Besides, he had grown up with dogs and considered himself loyal to man's best friend. But the animal seemed intent on joining him.

"As soon as I got her to relax, that's when I decided to bring her with me," Nicholson said.

He plopped her in his front basket, clearing out some digital equipment to make room for his companion.

She wasn't satisfied with that perch, however, and instead climbed up onto Nicholson's shoulder. From there, she kept watch and nuzzled him. Quickly becoming accustomed to the bumps and swerves of the road, she dozed off.

Nicholson found a vet in Montenegro, where he learned that she was about 7 weeks old and had no microchip.

"So I was like, 'I'll just keep her,'" he recalled thinking. He had a chip installed, and made sure Nala got the vaccinations that would allow her to accompany him across borders.

He found a proper cat compartment - which even boasted a small window allowing Nala to peer outside - and purchased a harness to make sure she stayed by his side.

With that, the pair returned to the open road, making their way to the ancient Montenegrin city of Budva, with winding stone streets and sweeping views of the Adriatic.

"Nala stole the attention of every passing tourist and even managed to get me a free pint," Nicholson wrote of the visit in December on his Instagram page, which quickly drew loyal followers.

The two were inseparable, as Nala clung to Nicholson's back when he was cycling or burrowed in his armpit when he stopped to pitch his tent at night. They shared meals at their deserted campsites, as he devoured pasta and fries and she ate cat food. He sipped coffee. She lapped water.

Bouts of bad weather slowed the journey to Tirana, the Albanian capital, but the time passed quickly for Nicholson, who was distracted by his furry friend.

Passersby were distracted, too. Nicholson wasn't used to getting so much attention. But he understood why heads turned to follow the cyclist with a cat strapped to his handlebars or hanging from his neck. "It's an unusual sight," he allowed.

They spent Christmas in Himara, in southern Albania, where holiday treats left Nala tuckered out.

On the beach, he taught her how to hunt, filming her pursuits with his GoPro. He even took her out on the high seas, plopping her between his legs on a kayak.

At the end of the year, Nicholson briefly put their journey on hold. The rain and cold that had trailed them down the Albanian coast had left Nala with a chest infection. She was given antibiotics, and he posted up with her in a hostel for several weeks of recovery.

By early January, things were looking up, as Nicholson documented his companion's second cough-free day.

"She's fearless," he said of the feline.

Meanwhile, he pitched in at the hostel, chopping logs for fire wood and collecting oranges for juice. He also passed the time by clearing nearby beaches of plastic and other waste.

Nala, ever observant, watched from his shoulders.

On Jan. 17, they were ready to set off once again, with a more secure - and waterproof - setup for Nala. Greece beckoned.

They tootled through the birthplace of democracy, sunned themselves on beaches and hiked through forests. Nicholson scored his first shower in a month when a random family in Athens agreed to take them in for a week.

As spring came, Nicholson was moved to make explicit Nala's imprint on him. He stopped in Thessaloniki, in northern Greece, to tattoo her paw print on his right forearm.

Their relationship hasn't been without hiccups. At the end of March, Nicholson knocked her cat food from the treehouse where they were sleeping. Dogs got to it, leaving Nala with only plain spaghetti for a stretch.

Now, Nicholson and Nala are in Santorini, the crescent-shaped island in the Aegean Sea where they plan to pass the summer months. He landed a job as a sea kayak tour guide.

When autumn rolls around, he'll pack his bags and head for Australia, passing through Turkey and Georgia and then making up his route as he goes.

From Australia, he plans to fly to Argentina, and then to cycle all the way up to Canada.

By the time he's finished, Nicholson will have seen remote corners of the world.

"I'll also have seen this cat grow up, which is maybe even more incredible," he said.