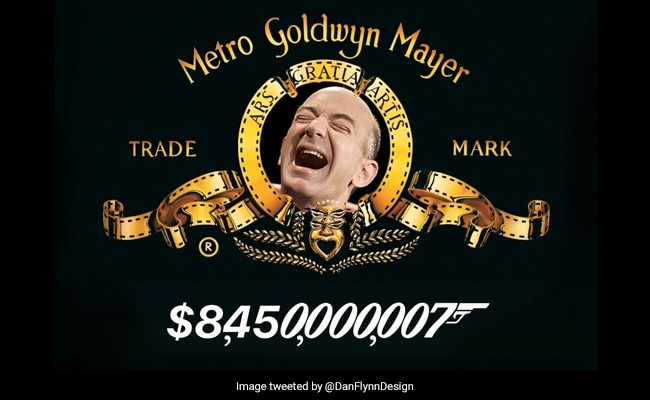 Amazon, on Wednesday, acquired famed Hollywood studio MGM for a whopping $8.45 billion. Acquiring the studio, which is behind some classic films and shows such as the James Bond franchise, The Handmaid's Tale, and Legally Blonde, will add to Amazon's extensive library of cinema. This, in turn, is expected to give Amazon an edge over streaming rivals such as Netflix and Disney+. "It's very exciting and provides so many opportunities for high-quality storytelling," Mike Hopkins, senior vice president of Prime Video and Amazon Studios said about the deal.

Mr. Bezos made the statement at the company's annual shareholder meeting on Wednesday. A Reuters report quoting Mr. Bezos stated that Andy Jassy would be taking over as CEO on July 5, the day Amazon was incorporated in 1994. Mr. Bezos had announced in February that he would be stepping down as CEO.

The developments regarding the acquisition and Mr Bezos' departure have given rise to some smart memes on the internet.

For instance, industrialist Anand Mahindra had a James Bond-inspired take on the news. He wrote, “The name's Bezos. James Bezos... (With apologies to Ian Fleming and Jeff Bezos).” British writer Ian Fleming is the brain behind James Bond.

“The name's Bezos. James Bezos... “ (With apologies to Ian Fleming and @JeffBezos ) https://t.co/7BgwH8DKPZ

American comedian and talk show host, Stephen Colbert believed that this will not be Mr. Bezos' last such buy before he steps down as CEO.

Amazon is nearing a deal to buy the Hollywood studio MGM. That is such a billionaire move. Next Jeff Bezos will buy Kellogg's just so he can make the MGM lion fight Tony the Tiger. #LSSCpic.twitter.com/ArN1cTKPY3

Actor-comedian Chris Pratt, too, weighed in on the development.

I'm gonna ask Jeff Bezos if it's too late
to change the title. https://t.co/DvNK9FecDi

Some even wondered if the Amazon head had some acting ambitions. One user said that Mr. Bezos just wanted to be a Bond villain.

Amazon acquiring MGM studios for $9 billion so Jeff Bezos can finally fulfil his destiny of becoming a Bond villain pic.twitter.com/FRbMkUqbyD

"Why would you buy an entire studio when you could get the James Bond CDs on Amazon already?" one user wondered.

This acquisition is dumb, since you can *already* buy the entire Bond franchise DVD box set on Amazon for only $75. pic.twitter.com/kIpbQxlGx6