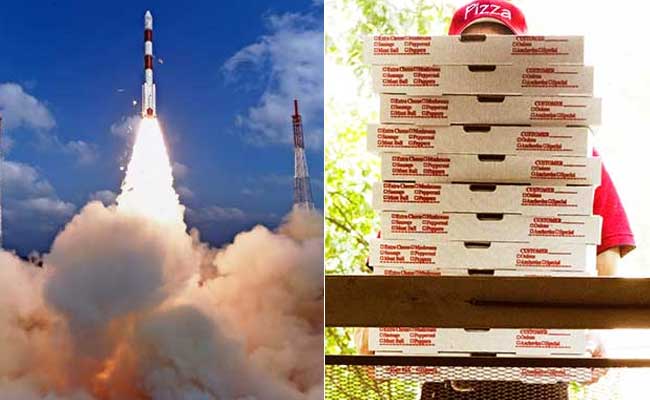 Pizzas are a great way to celebrate a big achievement at work and scientists at ISRO are no different. So, when ISRO made a world record by launching 104 satellites in space, a pizza chain was quick to sponsor the party!

Promoted
Listen to the latest songs, only on JioSaavn.com
Pizza Hut, a popular pizza chain, offered free pizzas to all ISRO employees across the country for their accomplishment. Pizza Hut invited ISRO staff to their outlets and avail their free pan pizzas. The announcement came on Twitter soon after the launch with a message for ISRO - 'we are loving it to the moon and back'.

The chain gave free pizzas worth Rs. 6 lakh to over 2,000 ISRO employees to celebrate their success. The offer came with its list of 'terms and conditions' but Twitter appreciated the gesture.

Launching the 104 satellites is indeed a big achievement. And this treat by @PizzaHutIN can double the fun! #PizzaHutForIndia

This is Super Encouraging the Staff for their work &a big treat from @PIzzaHutIn with a Pizza! #PizzaHutForIndia

@PizzaHutIN Thanks for showing your appreciation for ISRO Staff with a Pizza! #PizzaHutForIndia

On February 15, ISRO set a world record by putting 104 satellites in space at one go, the most by any space agency. They beat the Russian record of 37. Scientists at ISRO said the launch was not aimed at setting records. Bet the cheesy treat made their success even more worth it!

During government's demonetisation policy in November, the chain had offered free pizzas to people standing in long queues for cash and bankers who worked tirelessly. As long as there is free pizza, we're not complaining.