The video shows a child's miraculous escape after falling off a moving car on a busy road. 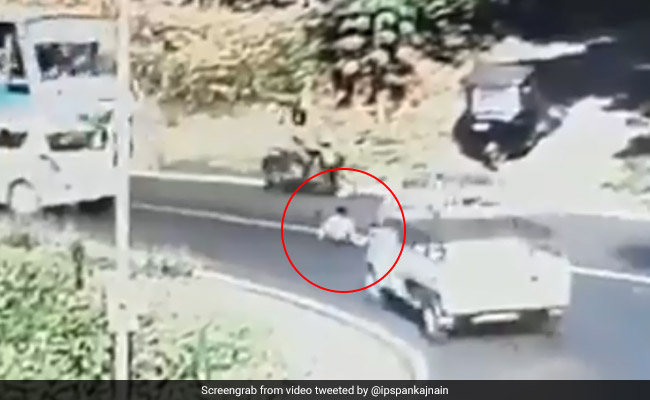 A chilling video shows a child falling off a moving car.

A video shared by IPS Officer Pankaj Nain on Twitter highlights the importance of child safety locks and child seats in cars when travelling with children. The video shared by Mr Nain shows a child's miraculous escape after falling off a moving car on a busy road.

The footage, first posted on YouTube on December 26, was reportedly captured by surveillance cameras in Kerala. In the distressing video, a child falls off a moving car and is thrown onto the road when the vehicle makes a sharp turn and its door is flung open. Thankfully, all other vehicles on the road - including a bus, an auto and a bike - stop immediately after seeing the child, preventing any further mishaps.

The car that the child was travelling in also stops immediately and the video shows him being carried back to the vehicle.

Mr Nain, while sharing the footage on Twitter, also posted a warning. "Child lock and child seats are very important when travelling with children," he cautioned. "Check all doors are closed properly, and child lock is on. Always make sit children in a child restraint seat. All kids won't be as lucky as this one."

Child lock and child seats are very important when travelling with childrens. Check all doors are closed properly, and child lock is on. Always make sit children in a child restraint seat. All kids wont be as lucky as this one. #Staysafe#Roadsafetypic.twitter.com/qfnf1rMrox

The video has been viewed over 6,000 times on Twitter, collecting a ton of shocked comments.

As you mentioned miracle saved the child.
Thanks to both bus & tempo drivers also for their alertness & immediate stoppage of vehicles.
Awareness is the best way to avoid like wise accidents #Staysafe#Roadsafety

Extremely important video why child lock is must when you travel with kids! https://t.co/rqFEc3DuRn

Last year, a one-year-old girl fell off a speeding Jeep in Kerala after her parents dozed off. She was found crawling in the middle of the road near a forest and reunited with her parents.