One of the pics shows him kissing the rice cooker. 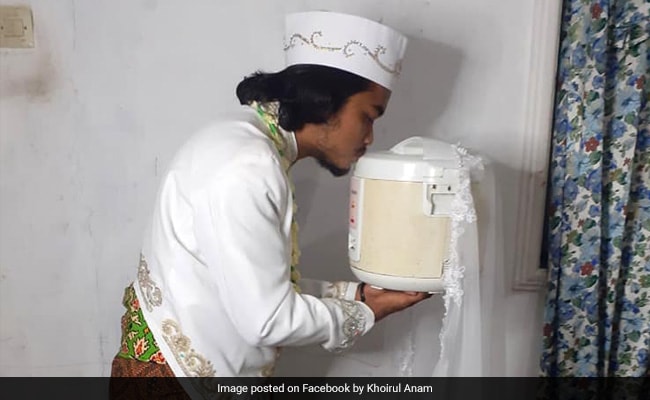 Khoirul Anam married his rice cooker in a wedding that created a buzz online.

An Indonesian man named Khoirul Anam has created a stir on social media by 'marrying' his rice cooker. Khoirul Anam shared a series of pictures last week that show him dressed up in fancy wedding finery for the ceremony. The white-coloured rice cooker he 'married' was also decked up for the occasion - it appeared alongside Mr Anam in a sheer white veil.

Photos that he shared on Facebook show them sitting side-by-side as the marriage was solemnised. One of the pics shows him kissing the cooker. In another, the appliance is placed next to him as he signs their marriage papers.

In a short caption accompanying the post, Mr Anam said he decided to marry his rice cooker as it was "Fair, obedient, loving and good at cooking."

The pics sparked much amusement on Facebook, collecting nearly 10,000 'likes' and over 1200 comments.

Bizarre as it may sound, the story only got stranger when, four days later, Mr Anam 'divorced' the kitchen appliance, citing that it could only cook rice. The Indonesian man announced the divorce on Facebook.

Of course, the whole wedding and the subsequent divorce was nothing more than a social media stunt for entertainment. Local news websites report that Mr Anam is a well-known celebrity in Indonesia who participates in outlandish stunts for the entertainment of his followers. Judging by the stir that his 'wedding' to the rice cooker created, it seems like he did succeed in his quest for viral social media fame.