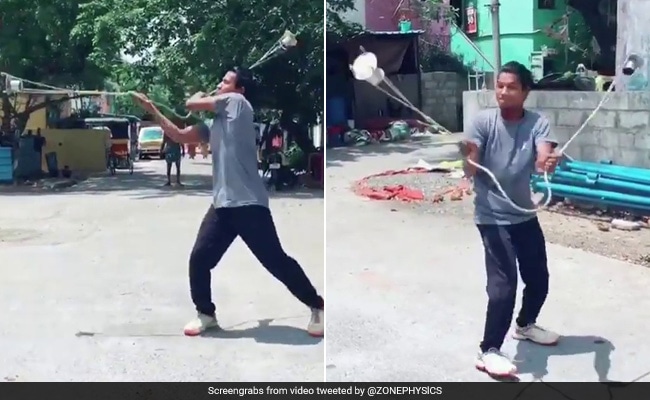 A viral video shows a man twirling glasses of water without spilling a drop.

In an astonishing video going viral online, a man is seen filling two glasses with water and placing one each at both ends of a long piece of rope. Using the rope, he lifts the glasses up and begins to swing them like a pendulum. Then, in a jaw-dropping stunt, he starts to twirl them around his head - spinning them vigorously in circles. The astonishing part? Not a drop of water falls out of the glasses as he does so.

This gravity-defying stunt is not actually magic, though it may well look like it. It is actually a neat trick that uses physics to make sure that water stays inside the glasses as they are spun around.

The video was shared on Instagram last month by Chennai resident Sarath. It was recently picked up by a popular Twitter account called 'Physics & Astronomy Zone' - which termed it a "beautiful display of physics". Take a look at the video below:

Since being shared one day ago, the video has collected a whopping 1.7 million views and more than 77,000 'likes'. It has also garnered a ton of impressed comments.

One Twitter user in the comments section identified the performer as a resident of Chennai's Kannagi Nagar who teaches slum kids.

Another praised his video as a "dazzling display of physics".

Fitting that this dazzling display of physics is taking place in the country that discovered and described it 10,000 years before the west. Amazing India. https://t.co/jopMty0Cdg

According to science magazine Scientific American, the trick of turning a glass of water upside down without spilling lies in inertia and centripetal force.

When driving a car, for example, if you go fast around a curve, you will feel like you are being 'pushed' to the outside of the curve. This happens because your body wants to continue travelling in a straight line due to inertia. "Your seat belt and the friction of the seat against your body pull you along with the car as it turns, however. This force that makes your body turn instead of continuing to go straight is called centripetal force," explains Scientific American.

The same concept applies to spinning liquids. The Indiana Public Media explains that when you spin the glass over your head, the water inside it tries to move in a straight line, but the glass prevents it from doing so. Therefore, as long as you keep the bottom of the glass pointed away from yourself, inertia will hold the water inside the glass.