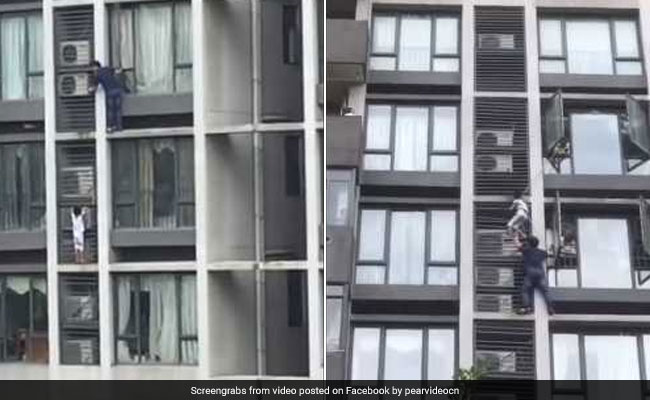 The boy had reportedly climbed out through a window after fearing thieves had entered his house.

A dad is usually his child's first hero. However, one father in China pulled off a feat one would associate with superheroes. A dramatic video shows a man climbing down a building without protective gear in order to save his son dangling from the seventh floor. The boy had reportedly climbed out through a window after fearing thieves had entered his house.

A video shared on Facebook by Pear Video shows the father climbing out of the window to help his son, who was standing on a ledge, holding onto a grille for dear life. The father is seen descending the building to reach a floor below his son in order to help him climb up. You can also see ropes tied around the boy, its other end being held by someone standing by the window above. The boy can be seen climbing up the grille like a ladder while his father stood on a ledge below. The boy is eventually seen being pulled into the house through the window.

According to DailyMail, firefighters had arrived at the scene and they pulled the boy back into the house. They managed to rescue the father as well.

Earlier in June, a man scaled five stories of a building in order to save a child hanging from a window. A video of the heroic rescue won many hearts online.