Over 1.4 million views for this hilarious khichdi recipe. 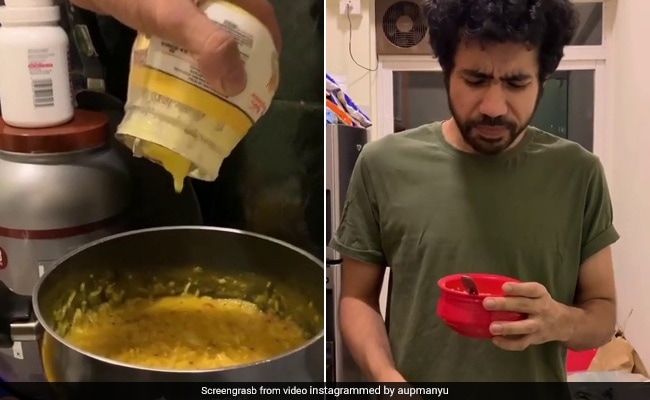 Move over, dalgona coffee - the Internet has found its new favourite dish, and it's none other than the humble khichdi. The ultimate comfort food of many Indian households found a spot on YouTube's trending list recently, thanks to a video shared by comedian Abhishek Upmanyu.

Mr Upmanyu, who is known for his hilarious stand-up videos, put on the chef's hat to share a recipe for khichdi that will have you laughing out loud. At a time when many people have taken up cooking while staying indoors during the pandemic, this khichdi recipe will stand you in good stead - but only if you don't have a problem with ghee and haldi.

The comedian begins his video by listing out all the ingredients needed to prepare a delicious plate of khichdi - rice, lentils, half a kilo ghee, a little salt in a big container, spices, red chilli powder and turmeric. But before you begin making khichdi, don't forget the most important thing you will need - bhookh or hunger.

He also speaks about the origin of this popular dish and shares some interesting 'facts' about it. In the video, Abhishek Upmanyu jokes that khichdi was invented by a lazy man (or woman) who realised that cooking rice and lentils together would not only save time, it would also cut down on dirty dishes that need washing up.

Khichdi has, in fact, been a staple dish in South Asia for centuries. During the 1600s, French traveler Jean-Baptiste Tavernier came to India and noticed khichdi being prepared with green lentils, rice and clarified butter (ghee). He referred to it as a peasant's evening meal. The Mughal cooks took this humble meal from the streets and gave it a gourmet appeal.

To find out more such hilarious 'facts' about khichdi and to know the right amount of ghee that goes into making a perfect plate, watch the video below:

Since being posted on YouTube two days ago, the khichdi recipe has collected a whopping 1.4 million views on the video sharing platform and a place at the 14th spot on YouTube's trending list. It has also garnered another half a million views on Instagram, along with thousands of amused comments.

"Naa, maza nahi aaya. Haldi thodi aur daalni thi (Nah, should have added some more turmeric)," quipped one Instagram user. To this, Mr Upmanyu responded by thanking her for the feedback and promising to add an extra box of haldi and ghee the next time.

"Legends say Abhishek is still adding ghee in his khichdi," another joked.

"Finally a worthy opponent to Sanjeev Kapoor," a commenter wrote, while a third said, "Thank you. Next time please show ghee Maggi."

If you like funny cooking videos, also check out Diljit Dosanjh's recipe for "fat free" pasta.

What do you think of this khichdi video? Let us know using the comments section.