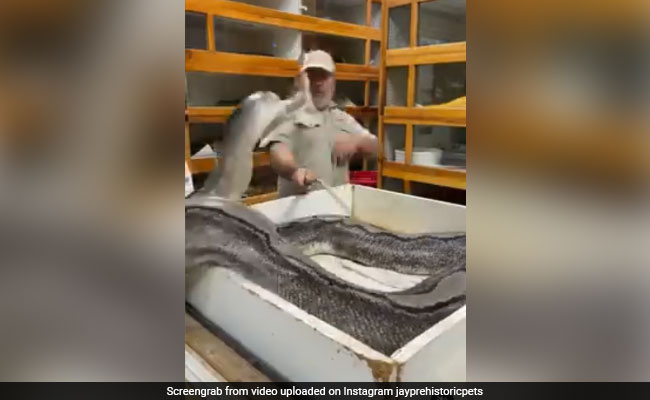 A snake attacked a zookeeper at the Reptile Zoo in California.

It goes without saying that handling snakes is a risky business. Even the most experienced of snake handlers sometimes have close calls - as illustrated in this video by Jay Brewer. Mr Brewer, founder of the Reptile Zoo in California, has years of experience in dealing with snakes. In fact, his Instagram is full of pictures and videos that show him handling scary-looking reptiles with practised ease. In many of these, he can be seen sitting in the midst of several large snakes - a sight that's enough to send a chill down the spines of most people, but which he describes as his dream come true.

As you can imagine, Mr Brewer's job is a fairly dangerous one, a fact well illustrated by his latest Instagram video which shows a huge python attacking him.

In the clip, the zookeeper is seen standing next to a massive python curled up in a box. He takes his eyes off the reptile for a split second, but that is enough time for the snake to launch a sudden and shocking strike.

Luckily, Mr Brewer was able to dodge the attack.

"Wow! As soon as my eyes shifted off of her. See how smart this snake is? The second I shifted my eyes off, she knew that I wasn't ready to jump," he explained after dodging the snake.

Since being posted on Sunday, the Instagram Reels video has racked up over 8.9 lakh views and over a thousand stunned comments.

"Nice reflexes, my friend. Amazing video," wrote one person in the comments section.

"Almost caught your face," another remarked.