How Zookeepers Gave An Alligator CPR 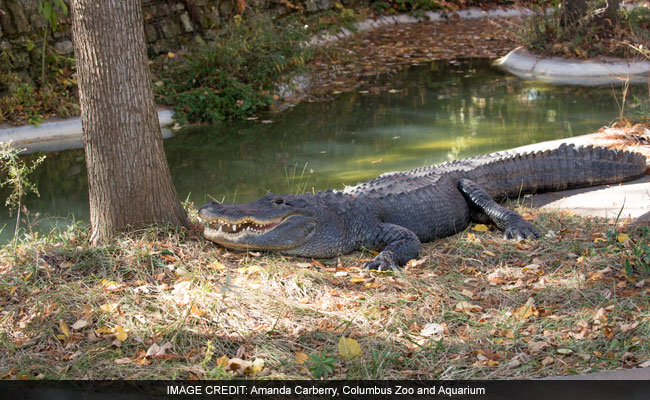 The Columbus Zoo's male alligator, seen here, had a respiratory illness and died after being given CPR.

For several weeks, the adult male alligator at the Columbus Zoo had been treated by veterinarians for respiratory disease. So it was no enormous surprise to the reptile keepers when they checked on him July 9 and found him unconscious and not breathing.

What the keepers did next, however, was certainly surprising to the nearby crowd of zoo-goers: alligator CPR.

It didn't work, and the unnamed, middle-aged gator died. But it did raise some questions about the procedure. Was this the ultimate jaws of life situation -- a human mouth wrapped around a giant, many-toothed, sometimes man-eating reptile's snout?

Nope, not at all. Randy Junge, a veterinarian who is the zoo's vice president of animal health, said alligator CPR consists of chest compressions only, because that's the most important component of CPR. (Hands-only CPR, in fact, works on humans, too, and lots of people are now being trained in it).

"If you're getting adequate compressions, you're not only circulating the blood, but you're expressing air out of the lungs," Junge said. Mouth-to-mouth "is not necessary," he said.

That doesn't make gator CPR easy, and you really shouldn't try it at home. In Columbus, a team of four keepers hoisted the 300 lb. alligator and turned him on his side to begin compressions, Junge said. Once the reptile was breathing again, he was rushed to the zoo's hospital, where he was given intravenous fluid and emergency medications. A tube was inserted into his trachea to help him breathe.

The gator was stable for about an hour before he again "declined," Junge said. Two more rounds of CPR weren't successful, and the animal died, leaving behind his female enclosure-mate. (Not that kind of mate, said Junge, who characterized the animals' relationship like this and nothing more: "They lived together.") Respiratory diseases such as pneumonia are common among captive alligators, and it's not clear why, Junge said.

In his 30 years as a zoo vet, Junge said he has performed CPR on so many animals that no such experience really stands out his memory. "The procedure is pretty much the same whether it's a person or a mouse or an alligator," he said.

But you can give mouth-to-snout in some cases - if your dog stops breathing, for example. In most cases, vets say, you lay the dog on its right side, though barrel-chested canines like bulldogs can be laid on their backs. After a series of chest compressions above the heart, you make sure the dog's muzzle is tightly closed, place your mouth around its nose and blow into its nostrils. There's a handy infographic on trudog.com.

And if you are a very intrepid wildlife biologist, you can do mouth-to-snapper on a turtle. David Steen, an Auburn University scientist, did just that on a drowning Florida Cooter in 2014, and it worked. Within an hour, the little thing had a spring in its crawl, and Steen released it back into the water.