The first "Earth sandwich" is credited to the American artist Ze Frank. 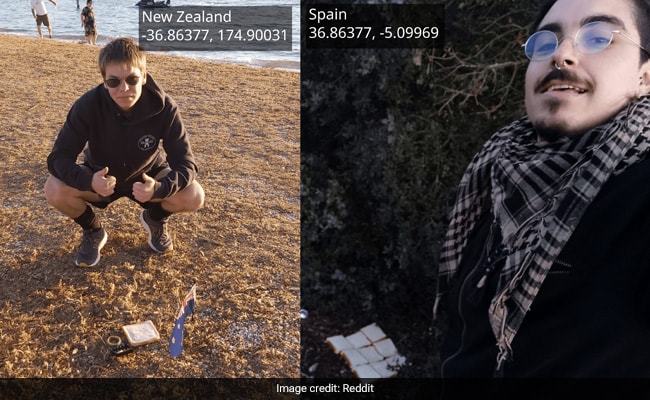 Etienne Naude from Auckland made an "Earth sandwich" with the help of a stranger.

Two men in New Zealand and Spain have created an "Earth sandwich" by placing slices of bread on precise points at either side of the planet, it was reported on Monday.

The man behind the sandwich, Etienne Naude from Auckland, told the BBC that he wanted to make one for "years", but had struggled to find someone in Spain, on the other side of the globe.

He finally found someone after posting on the online message board, Reddit.

The men used longitude and latitude to make sure they were precisely opposite.

The first "Earth sandwich" is credited to the American artist Ze Frank, who organised two slices of baguette to be placed in New Zealand and Spain in 2006.

Others have since followed, although not all reported examples have been bona fide, opposite-point Earth sandwiches.

"It was quite hard to organise since it's a 12-hour time difference," Naude told the BBC, adding: "And there's lots of things to arrange, such as the kind of bread, the time, the (precise) location, et cetera."

Naude only had to travel a few hundred metres to find a suitable public spot on his side of the world. His Spanish counterpart had to travel 11 km.

Using a "near top of the range laser cutter", he burnt an "Earth sandwich" design onto 20 slices of bread, then used one slice to mark his exact, tightly-defined sandwich spot in New Zealand.

His counterpart used nine slices of unmarked bread to make sure he covered the exact spot.

The scientific name for points opposite each other on the Earth's surface is antipodes - a term sometimes used to describe New Zealand, as it is roughly opposite the UK.

According to World Atlas, only around 15 per cent of "territorial land" is antipodal to other land.

The UK, Australia and most of the US do not have antipodal land points - the other side of the world is water.