The nine-second video shows the man standing on a rocky outcrop. 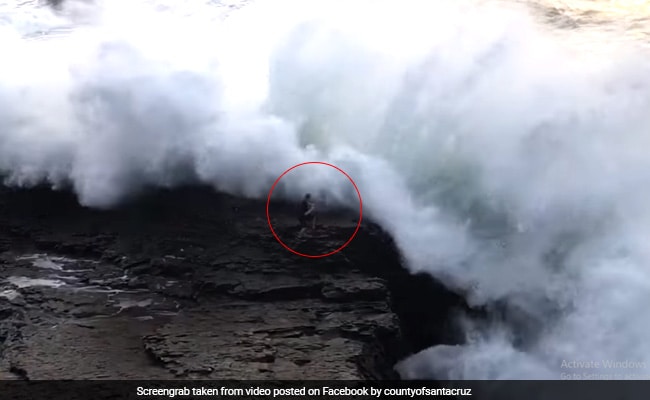 A visitor at the Bonny Doon Beach was swept into the water.

A video of a man being swept into the ocean by strong waves has shocked netizens. The video was shared by Santa Cruz County on its Facebook page last Tuesday, at a time when the US National Weather Service had issued a high surf advisory. According to LA Times, the incident occurred at around 4 pm on December 20, when the beachgoer was perched on some rocks near the ocean.

The nine-second video shows the man standing on a rocky outcrop at Bonny Doon Beach in Santa Cruz, California. A couple of seconds into the video, one particularly large wave crashes over the man, sweeping him into the ocean.

ABC News reports that luckily, the 20-year-old man was saved by Cal Fire and California State Parks rangers. Officials say that he is expected to be okay.

The County of Santa Cruz issued a warning while sharing the video on Facebook. "Be careful on your coastal New Year's Day hikes, and never turn your back on the ocean!" they wrote. "Waves can sneak up on you, as this Bonny Doon beachgoer recently discovered."

The video has collected a number of horrified comments. "He looks like an ant on that rock! Lucky he was rescued," wrote one person. "He almost won a Darwin Award," said another.

The unnamed beachgoer was treated for his injuries and transported to a hospital. His injuries are not believed to be serious.