This Is The World's Most Expensive Pineapple, Costs Rs 1 Lakh

The Heligan garden officials said if the fruit is auctioned, each pineapple can fetch up to Rs 10 lakh. 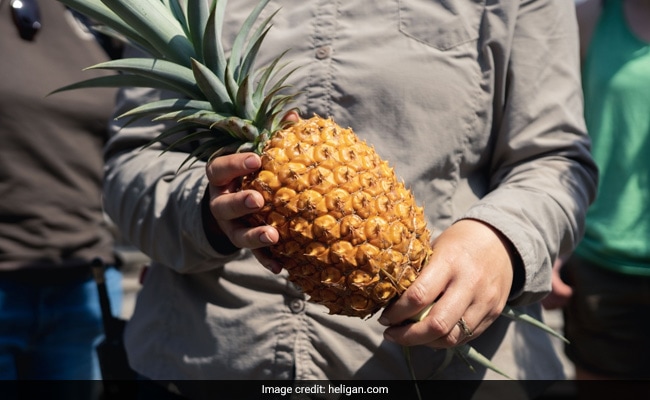 The Heligan pineapple was brought to Britain in 1819.

Pineapple is a rich source of Vitamin C, anti-oxidants and minerals like manganese and potassium. It is an excellent fruit for health, especially during the winters. But did you know that there is a variety that's a bit costly to afford. The Heligan pineapple, named after the garden where they are grown in England's Cornwall, costs about 1,000 pounds sterling (Rs 1 lakh) each taking into account the hours of work that goes into growing them, according to a BBC report. It takes around two to three years for a crop to be ready.

According to a website dedicated to the high-profile fruit, it was brought to Britain in the year 1819. Soon, the horticulturists realised that the country's climate is not good for pineapple cultivation. So, they devised a trick - by designing special wooden pit-shaped pots and adding fresh supply of decomposing manure to nourish it and a backup heater. The heat warms the air that enters the pits through vents in the wall.

"Pineapples are a very labour intensive fruit to grow. With the man hours it has taken to look after the pineapple, transport costs of manure, maintenance of the pineapple pits and other little bits and pieces, each pineapple would probably cost us in excess of 1,000 pounds," a Heligan spokesperson told the BBC.

"Now that we have learned the correct Victorian techniques, it's a really rewarding process for our gardeners and visitors alike," the spokesperson further said.

The Heligan website further said that Queen Elizabeth II was gifted the second pineapple ever grown at the Victorian greenhouse.

It further said that these pineapples are an eclectic mix of plants gifted to Heligan from Kew Gardens and rare individuals acquired from the Caribbean.

The garden officials said if the fruit is auctioned, each pineapple can fetch up to Rs 10 lakh.