He Was Arrested For Car Theft. Then Cops Found Out About His Illegal Pet

The capuchin monkey was taken to a primate sanctuary while his human was detained. 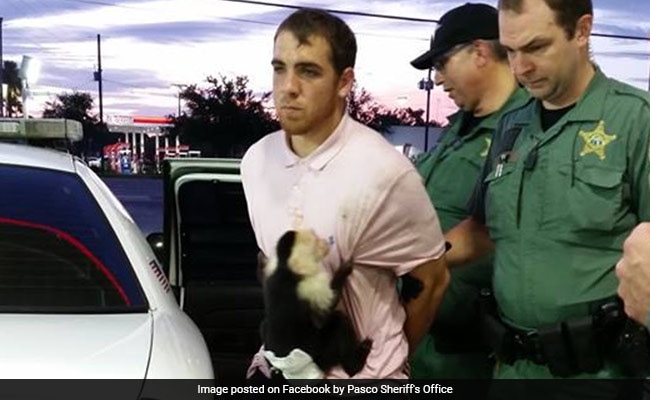 Cops In Florida, USA were surprised to find an exotic monkey clinging to a man as they arrested him for car theft. Sadly, for the carjacker, he had to part ways with both the vehicle and his pet.

The man, identified as Cody Blake Hession, crashed the stolen vehicle in a ditch in Florida's Holiday suburb, Pasco County Sheriff's said in a Facebook post. When cops reached the crash site to arrest the offender, a capuchin monkey was found clinging to his T-shirt.

Video recorded on a body-worn camera shows the primate, seen wearing a diaper, clutching the man as he completes paperwork with the police officers. One officer asks the man to say his goodbyes to his pet. In an endearing moment, the monkey gives a long embrace to the man before being led into an animal crate. The man appears emotional as the monkey kisses him on the face.


To add to the carjacker's woes, it was revealed that he didn't have a proper permit to keep the furry pet which could result in additional charges against him. The man reportedly bought the monkey three years ago from a breeder but may never get to see the ape again due to lack of a valid license, reported Daily Mail.

In the comments section, many sympathised with the man, ignoring the crime he was arrested for.

The monkey was taken to a primate sanctuary while his human was detained, police said.Click for more trending news