He Sang To Her, Held Her Hand When She Was Sick. Then She Died - Here's What Happened To Him 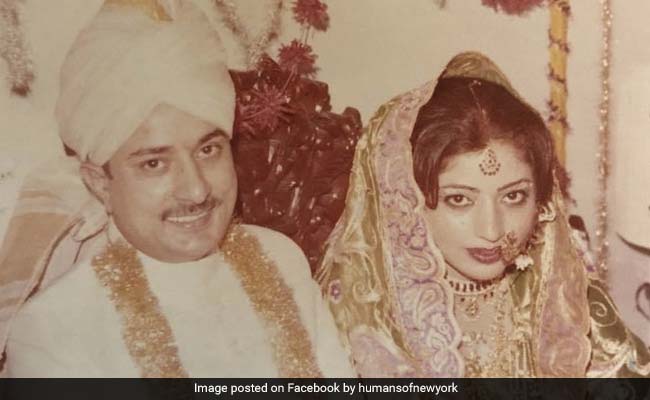 A woman recalls the touching love story of her parents.

A post on the popular Facebook page 'Humans of New York' details the touching love story between a man and his wife. The post emerged out of an interview with the couple's daughter, who remembered her father as an affectionate man who sang to his wife, held her hand when she was sick and lost his will to live after she died.

"He had five daughters. And whenever he came home from a work trip, we'd all line up to give him a kiss. But he always kissed my mom first, because she was his 'first love'," says the woman, who has not been named.

She recalled the times when their family went on road trips, where her father sang to her mother the whole way - just like he did at the karaoke parties they hosted. "But that kind of affection wasn't normal in our culture. We used to have these karaoke parties with our extended family, and everyone else would sing normal songs. But Papa would choose these old, romantic Bollywood songs. And he'd sing directly to Mama," she said.

Her mother, she said, loved every minute of it. She would get dressed up for her husband and do her hair just how he liked it - even after she got sick. After being diagnosed with a brain tumour, she underwent a number of surgeries.

"After every surgery, more and more of her would slip away," says her daughter. When she could no longer walk properly, her husband held her hand everywhere they went. "He'd sit next to her bed, and stroke her cheek, and recite the Quran until his lips went dry."

In her final moments, their daughter remembers, he told her: "You won't be alone. I'm coming with you."

The statement seemed selfish to her, and she admits it made her angry - "as if the rest of us weren't worth living for."

After that, says the woman, her father applied for the plot next to his wife's grave. He visited her grave every day, and "every few hours he'd ask if the cemetery had called. He was obsessed."

When the paperwork finally arrived, he grew very quiet and did not say much for two days. On the third day, he said he wasn't feeling well. "I bent down to help him with his shoes, but he collapsed on the floor. There wasn't time for him to suffer," says his daughter.

By the time the ambulance arrived, he was already gone.

You can read the full interview below:

Since being shared online, the HONY post has collected over 3.6 lakh reactions and over 15,000 comments.

"So touched by this story! And what a rare gift to receive as a child- the model of a truly loving and affectionate adult relationship!" wrote one person in the comments section.

"This is sad and beautiful at the same time! Very sorry for your loss but you are lucky to have witnessed the purest form of love and devotion," said another.