Gul Panag Dreamt She Was Jailed For This Reason. She's Now Warning Others 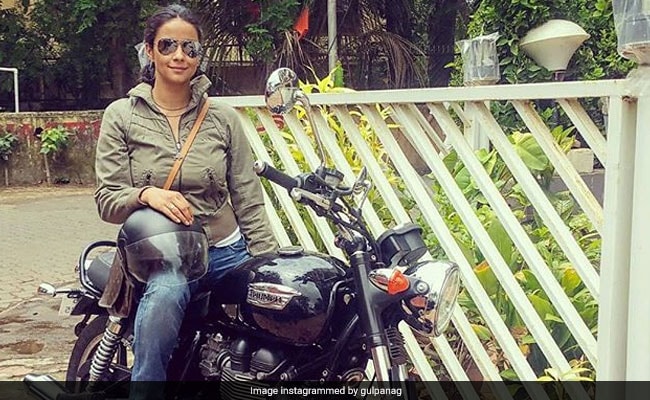 Gul Panag's post is accompanied by a picture that shows her sitting on her bike.

All those jail sequences in movies, more recently the ones in Ranbir Kapoor-starrer Sanju, are scary enough to make anyone shudder. That's probably why Gul Panag is talking about a recent dream she had in which she was behind bars and is now using it to warn others. "Dreamt that I was in jail. For riding without a helmet," she says in an Instagram post shared earlier today. Through her post, the model-turned-actress is reminding everyone about the importance of always riding two-wheelers with one's helmet on.

"NEVER, EVER RIDE WITHOUT A HELMET. No matter how short the distance," the 39-year-old says on Instagram. She even mentions that no matter how badly one is tempted to seem "cool" or avoid "helmet hair", it's imperative one rides bikes with the helmet on.  "Also, it's not a handbag. So don't put it on your arm," she says.

Her post is accompanied by a picture that shows her sitting on her parked bike with her helmet in her lap.

Dreamt that I was in jail. For riding without a helmet As good a reminder as any - NEVER, EVER RIDE WITHOUT A HELMET. No matter how short the distance. No matter how strong the temptation ( to not get 'helmet hair', to look 'cool' ,etc). Also, it's not a handbag. So don't put it on your arm. #helmet #ridesafe #bike #biker #motorcycle #Triumph #triumphmotorcycles #bikersofinstagram #bikegram

Since being posted some six hours before writing this, the post has collected over 7,000 'likes'.

"Yes boss... We will always follow your instructions," says one Instagram user. "It's not a handbag. Me yelling at every rider who does that. Trust me!" says another.

Back in March, actor Kunal Kemmu posted a similar PSA about wearing helmets during bike rides and even landed in a pickle because of it. The Golmaal actor had tweeted an apology for riding his bike without a helmet in pictures doing the round of the Internet. Calling the incident 'embarrassing', Kunal tweeted, "I don't want to set the wrong example!" Mumbai Police not only noticed the tweet but also replied with a stern warning and punishment.

.@kunalkemmu You love bikes, we love every citizen's safety. And we wish a regret could avert mishaps! Hope next time the realisation won't be an afterthought! An e - challan has been dispatched https://t.co/PSZsLZY04b

Master Blaster Sachin Tendulkar has also requested fans to wear helmets when riding two-wheelers. He even tweeted a video showing him talking to two bikers about it. "Make me a promise, next time you will wear helmets," he told them on camera.

Well, let this be a good reminder that helmets are important while riding two-wheelers.