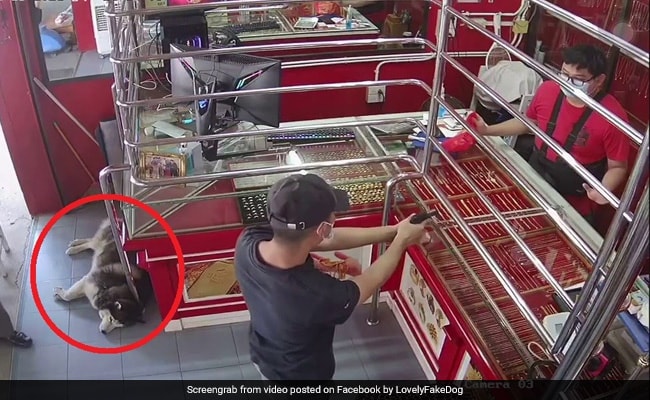 Lucky the dog sleeps through an armed robbery training drill.

It is generally believed that huskies, with their friendly, non-aggressive temperaments, do not make for good guard dogs - a point well illustrated by this hilarious video which shows a pet husky sleeping through a mock robbery drill.

According to the Daily Mail, Lucky is a husky dog who belongs to the owner of a jewellery shop in Thailand. During a training exercise and security preparedness drill on February 16, an armed robber entered the shop and pointed a fake gun at employees, demanding that they hand over jewellery and cash.

The drill was conducted by police to check security and train the staff on how to act during armed robberies, reports The Mirror. Worawut Lomwanawong, who owns the jewellery store in Thailand's Chiang Mai city, kept waiting for his guard dog to wake up and tackle the fake robber - but Lucky kept sleeping even as a mock robbery unfolded a few feet away.

Hilarious CCTV footage shows the dog refusing to wake up, completely unaware of the armed bandit and ignoring the racket created by the mock robbery drill. The footage was posted to a Facebook page dedicated to Lucky.

The hilarious footage has been viewed 1.4 million times on Facebook, where it has been flooded with comments from amused spectators.

Lucky's owner, Worawut Lomwanawong, spoke to Bored Panda about the spectacular failure of the training exercise.

"The armed robbery in this video is of a policeman that my dog Lucky already knew; maybe that's why she did nothing," he said. "I found it very funny to see that she didn't even try doing anything and continued to sleep."

Mr Lomwanawong added that he adopted Lucky seven years ago from the streets and described her as a "smart" and "active" dog.