Google Turns 23: Here Are 10 Things You Probably Didn't Know About The Internet Giant 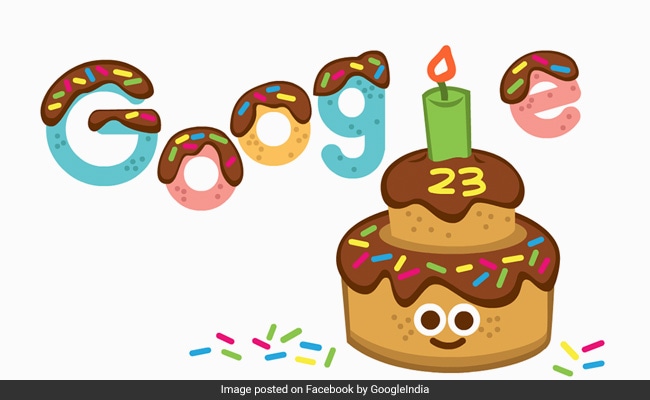 Google is commemorating its official establishment on September 27, 1998.

Google is celebrating its 23rd birthday today, commemorating its official establishment on September 27, 1998. The Internet giant is celebrating 23 years of existence with an animated chocolate cake on its homepage. Google founders Sergey Brin and Larry Page met in 1995 at Stanford University. The search engine they built together went live on Stanford's network in 1996. In 1998, Google Inc was officially born. "Every day, there are billions of searches on Google in more than 150 languages around the globe," Google wrote in a blog post about the new Doodle. "From its first server housed in a cabinet built out of toy blocks to its servers now being housed in more than 20 data centers globally, its mission of making the world's information accessible to everyone remains the same," the post read further.

Here are 10 fun facts you (probably) did not know about Google:

Google has its origins in BackRub - a research project that was begun in 1996 by Larry Page and Sergey Brin. Some speculate that Google's original name was BackRub because the program analysed the web's "back links". According to Google's website, Larry and Sergey, working from their dorm rooms in the late 90s, built a search engine that "used links to determine the importance of individual pages on the World Wide Web. They called this search engine Backrub."

Google had to change its phone number

When Google was still in its infancy, the company accidentally published its phone number on the website and was inundated with phone calls. "We were in a small office in Palo Alto and we had maybe less than 30 people there, or something like that. And we already had millions of users," Larry Page told Time magazine. "We'd accidentally published our phone number on our website, and our phone number was just unusable. We had to get a new one then, because people just started calling us."

Google's first server was made of Lego bricks

In 1996, Larry Page and Sergey Brin built a house made of Lego bricks to house their first server. It contained 10 disks of 4GB each. You can check it out here.

Google's first office was a friend's garage in Menlo Park, California. The founders rented their workspace from Susan Wojcicki, who is today the CEO of YouTube. The company worked out of the garage for six months before moving out.

"Don't be evil" used to be, perhaps, the most important phrase in the company's corporate philosophy, until it was quietly removed in 2018. According to Gizmodo, "don't be evil" was part of the company's corporate code of conduct since 2000. While the phrase was removed from the beginning of Google's code of conduct, it is still part of the updated version: "And remember... don't be evil, and if you see something that you think isn't right - speak up!"

Gogle.com will take you to the Google homepage

Google has smartly bought domains that resemble its name in a retort to "typosquatters" who benefit from spelling mistakes made by users. Therefore, if you type Gogle.com or Gooogle.com, you will still be redirected to Google's homepage.

What does an Internet giant need with 200 goats? Apparently, Google uses them to mow the lawns around its headquarters. "Instead of using noisy mowers that run on gasoline and pollute the air, we've rented some goats from California Grazing to do the job for us (we're not "kidding"). A herder brings about 200 goats and they spend roughly a week with us at Google, eating the grass and fertilizing at the same time," Google said in a blog post from 2009.

Sundar Pichai is today the CEO of Google and its parent company, Alphabet, but he happened to be interviewing for a job at Google on the day they announced Gmail. I remember people asking me about Gmail - 'What do you think of it?' I had no idea if was an April Fool's joke, or if it was real," Mr Pichai told Time.

Google has a well-known fondness for pranks, easter eggs and hidden games. Just search for "elgoog.im" to know what we are talking about.