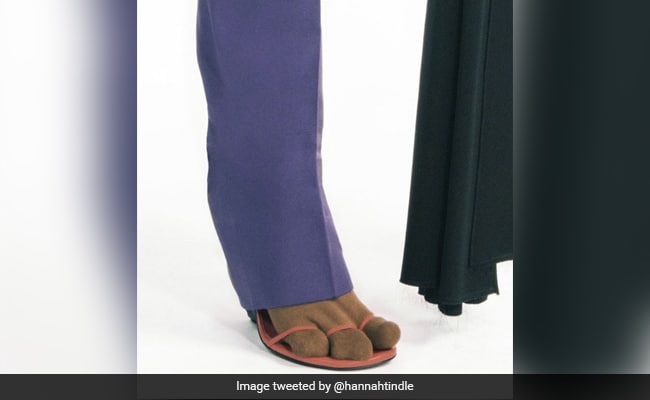 French luxury fashion Givenchy's latest offering - three-toed socks and sandals - have created a huge buzz on social media for their unusual design. Part of American designer Matthew M Williams' debut collection at the Paris Fashion Week, the socks and sandals are reminding everyone of a beloved cartoon character - Scooby Doo.

"My friend just said that the Givenchy SS21 three-toed sandals and socks look like Scooby Doo's feet and I have officially lost it," Twitter user Hannah Tindle posted.

Along with a picture of the brown socks and orange sandals, she shared a photo of Scooby Doo's paws. The resemblance is uncanny. See for yourself:

My friend just said that the Givenchy SS21 three-toed sandals and socks look like Scooby Doo's feet and I have officially lost it pic.twitter.com/wVTkcVlELO

Since being posted two days ago, the tweet has garnered nearly 6,000 'likes' and hundreds of amused comments. Many in the comments section agreed that the footwear did indeed resemble the paws of Scooby Doo, while others dropped hilarious reactions.

"This is an abomination," wrote one person in the comments section.

"Sometimes fashion is just ridiculous," said another, while a third remarked, "My toes are uncomfy just looking at those."

I thought this was scooby dressed as the old lady on the plane lol https://t.co/HmpSfrXgLzpic.twitter.com/Eekz70vYRb

This, of course, is not the first time that a fashion house has faced the heat for one of their designs. Only recently, luxury brand Gucci has raised eyebrows with its latest offering - jeans and overalls that come with fake stains.

What do you think of these socks and sandals by Givenchy? Let us know using the comments section.