However, more than the dish itself, it is Anand Mahindra's witty caption that is making people laugh out loud. 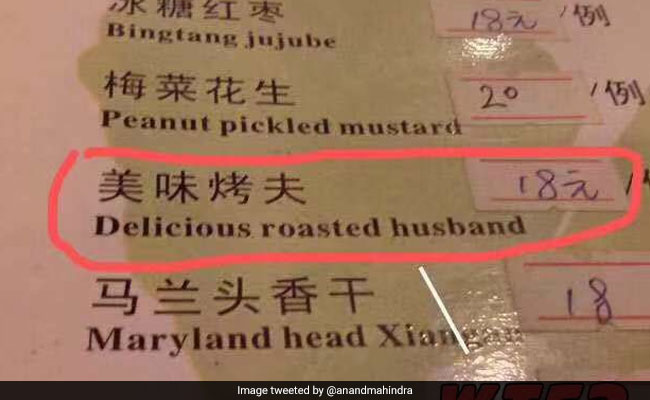 Businessman Anand Mahindra's latest tweet is sure to make couples around the world chuckle. The Mahindra Group Executive Chairman often reaches into his WhatsApp wonder box to pull out funny pics, heartwarming stories and entertaining videos. This time, his wonder box delivered a dish which husbands may not find to their taste.

In a tweet shared this morning, Mr Mahindra posted a picture of a menu which features a dish called "Delicious roasted husband". (Yes, you read that right)

However, more than the dish itself, it is Mr Mahindra's witty caption that is making people laugh out loud.

"I'm certainly going to think twice about visiting this restaurant with my wife.  Don't want her getting any creative ideas....!" wrote Mr Mahindra while sharing the pic.

I'm certainly going to think twice about visiting this restaurant with my wife. Don't want her getting any creative ideas....! #whatsappwonderboxpic.twitter.com/nyoGOBGo35

Since being shared, his tweet has collected almost 3,000 'likes' and a ton of comments.

This can't be true lol

Heartwarming to see such hilarious response from a leader like you...you are live evidence of mantra of success - Stay happy and keep people around you happy...

People also noticed how the "roasted husband" dish was quite affordable

The price is quite affordable too. Not sure if its main course ,starter or an appetizer

More off it's cheaper than peanut pickled mustard

Quite cheap as well... the rate

Curious to see what else Mr Mahindra's WhatsApp wonder box has treated us to? Take a look at at this delightful clip of New York cops joining a group of women for a garba dance.