Daniella Alvarez had to have her left foot and part of her left leg amputated due to complications following a routine surgery. 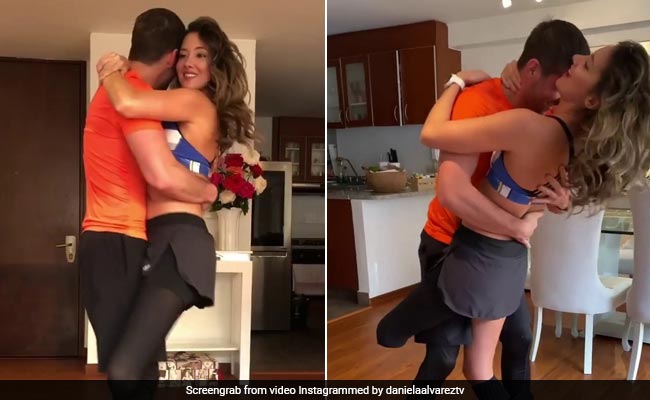 Daniella Alvarez is dancing again after a tough time. The former Miss Colombia, who recently had part of her left leg amputated, returned to the dance floor with a message of hope just two weeks after her last operation, reports the Daily Mail. On Monday, Ms Alvarez, 32, took to Instagram to share a video which shows her dancing with her brother, Ricki Alvarez.

"Putting swing to life with my favorite partner @rickialvarezv," she wrote in Spanish while sharing the clip. "Difficulties don't matter! We must be resilient in life!!"

The video shows her leaning on her brother for support as they sway to Elvis Crespo's 'Besos de Coral'. The siblings twirled around the room and performed a dip before wrapping up their dance routine, which has gone viral with a whopping 3.8 million views on Instagram.

The video has collected over 28,000 messages of support, with many praising the model for facing a tough challenge with dignity and determination. She had promised her 2.5 million Instagram followers in an earlier post that she would dance again following five operations in June.

Daniella Alvarez, who represented Colombia in the Miss Universe pageant in 2012, had to have her left foot and part of her left leg amputated due to complications following a routine surgery. In May, she had surgery to remove a lump from her stomach.

The operation caused complications and doctors soon diagnosed her with ischemia, which cuts of the flow of blood supply to an organ or body part. The model then opted to have part of her lower leg amputated.

Her right foot has also been affected. "My right foot has no functionality at the moment, it is asleep and I do not know when it will wake up, when it will have life again," she said last month according to celebrity news website Hola. "First, the foot has to regain sensitivity, and then I will have to learn to walk again. That process could take 6 months. In total, my recovery could take a year."