Watch: Diners At This Restaurant Get Fishy Pedicures Too

"I felt the fish biting my feet -- it was ticklish but nice," said one diner. 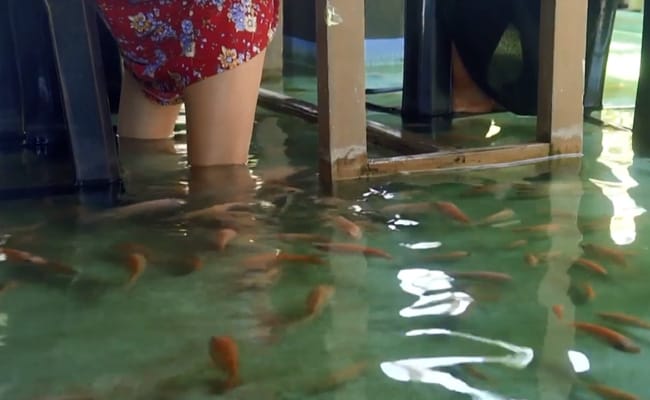 At Soto Cokro Kembang, little fish nibble at the feet of diners.

As he scarfed down a traditional Indonesian meal, Adi Karyanov got himself the two-in-one special at a new restaurant offering pedicures by fish.

The tables and chairs at Soto Cokro Kembang in Indonesia's cultural capital Yogyakarta sit in ankle-deep water, home to thousands of little fish that nibble dead skin off the feet of diners.

"I felt the fish biting my feet -- it was ticklish but nice," Karyanov said.

"They make it fun to eat here. It's kind of unique."

Many spas across southeast Asia have for years touted a fishy pedicure as an unproven but novel way of treating various skin conditions.

But restaurant owner Imam Nur, who opened in June, has gone a step further by offering it alongside his traditional Javanese "sole food".

Nur credits his father for coming up with the idea for the open-air restaurant, which has some 7,000 Red Nile Tilapia swimming around its patrons.

"We initially opened this restaurant just for locals living nearby," he said.

"But what's happening now is beyond what we had initially planned. It's become like culinary tourism. Many people are coming here from different cities."

Pressing fish into service to remove dead skin is not without controversy.

Some cities in North America and Europe have banned it over concerns about bacterial outbreaks, while People for the Ethical Treatment of Animals (PETA) has warned over both the health risks and possible cruelty to animals.

Still, visitors like Anna Widia were keen to give the fish treatment a whirl.

"I've never seen any place like this," she said.

"And it's big enough to bring the whole family."