"We were just out walking by the pond," the 74-year-old said, "and it came out of the water like a missile. I never thought an alligator could be that fast. It was so quick." 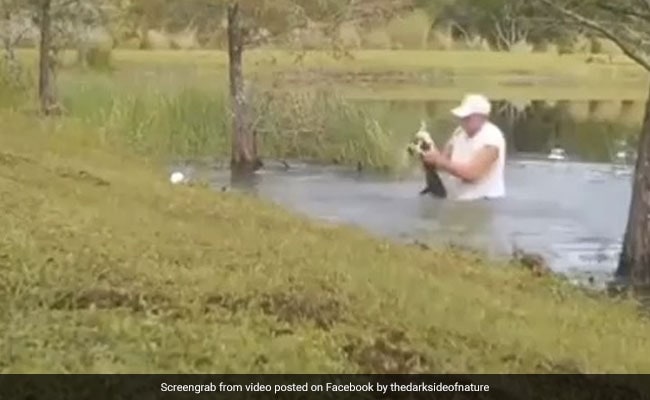 Richard Wilbanks, 74, pried open the jaws of a gator to save his puppy.

In a hair-raising video, a man was filmed rescuing his whimpering dog from the jaws of an alligator. Richard Wilbanks, 74, was filmed running into his backyard pool to save his three-month-old pup from certain death, reports CNN.

The dramatic rescue was captured on surveillance cameras that were set up in the area through a partnership between the Florida Wildlife Federation and the fStop Foundation.

"We were just out walking by the pond," Mr Wilbanks told CNN, "and it came out of the water like a missile. I never thought an alligator could be that fast. It was so quick."

The retiree immediately jumped into water to rescue his pet - a Cavalier King Charles spaniel named Gunner. He rushed underwater and pried open the jaws of the gator in order to save the whimpering puppy, saying that prying open the reptile's jaws was "extremely hard".

"He had one little puncture wound and I had, my hands were just chewed up," said Mr Wilbanks to KHOU-11.

Footage of the rescue is being widely shared on social media. Watch it below:

Several social media users applauded the 74-year-old for his courage and praised him for saving the life of his puppy.

Gunner the dog is doing well after a trip to the veterinarian, while Mr Wilbanks has received a tetanus shot for his injuries.

He says he is now being more careful while taking the dog out for walks, making sure to keep him on a leash and maintaining a distance of at least 10 feet from the pond.