Anand Mahindra shared a touching photograph of Japan's football team manager Hajime Moriyasu, in which he was seen bowing to fans after the World Cup exit. 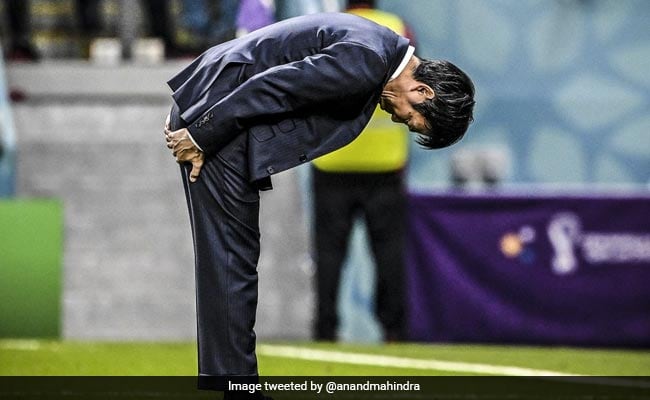 Japan lost to Croatia on penalty kicks on Monday.

Industrialist Anand Mahindra often shares his thoughts on social media on the events that are going on around the world. In his latest post, the Mahindra Group chairman shared a touching photograph of Japan's football team manager Hajime Moriyasu, in which he was seen bowing to fans in gratitude even after his team lost 3-1 to Croatia in a penalty shoot-out at the FIFA World Cup on Monday.

Mr Mahindra shared the image on Tuesday morning and since then it has garnered more than 20,000 likes and several comments. "Very humble attitude," wrote one user. "Respect, respect and more respect for this man, his team, his country and their culture of integrity and humility," said another.

A third commented, "Japan lost the match due to minor errors. but, they raised the bar of Asia on the football map," while a fourth added, "Japan keeps on impressing with their values".

Meanwhile, coming back to the match, Japan lost to Croatia on penalty kicks on Monday. While both teams managed to have an even score of 1-1 throughout the match, as a tiebreaker, the organisers then sought a penalty kick out. Here Mario Pasalic struck the winning penalty to send Croatia through. In total Croatians managed to score 3 goals, while Japan managed to score only one goal.

The loss saw Japan's bid to reach the last eight for the first time in their history coming to a crushing end. On the other hand, Croatia will now face Brazil in the last eight.