Family Shocked To Find Huge Python Inside Their Toilet

Two pictures that are going viral on Facebook show a huge python inside a toilet at a Brisbane home. 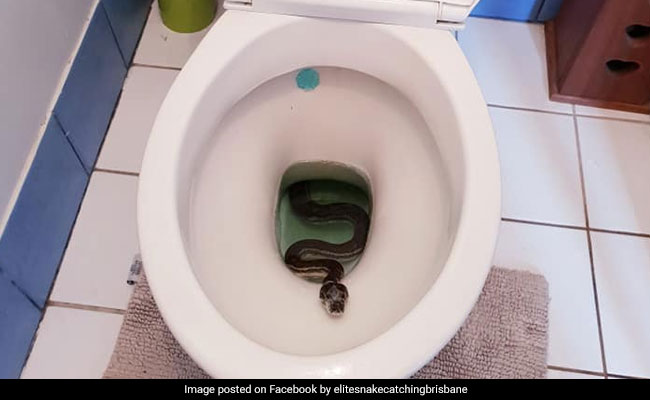 A family in Australia found a carpet python inside their toilet.

In today's edition of 'It happens only in Australia' - a family that found a python inside their toilet. Two pictures that are going viral on Facebook show a huge python inside a toilet at a Brisbane home. According to local reports, the snake was discovered by a family from Wynnum West in their toilet this weekend. The family called up Stewart Lalor from Brisbane Snake Catchers to capture the intruder.

"They gave us a call to have it removed so they could finish their business in peace, without the local natives watching," wrote Brisbane Snake Catchers in their Facebook post, sharing two pictures of the huge carpet python.

"I've got to stop looking at your page it takes me an hour to go from room to room checking there's no snakes," wrote one commenter. "This is my worst nightmare!!" said another.

According to Yahoo News, Mr Lalor believes that the python entered the toilet through the sewerage system.

"A lot of times they are chasing a rat or a mouse into the sewerage piping," he said. "This guy half took himself out (of the water) for me which was unusual. I think he was curious to see what was going on."

Mr Lalor managed to capture the python and release it outside.

In a similar incident back in 2015, a massive carpet python was found inside a toilet, also in Australia.

Fearless Grandma Drags Cobra, Tosses It Away In Jaw-Dropping Video