Vice President of Ford X Sundeep Madra was among those who seemed to think the Ford vs Tesla fight was unfair. 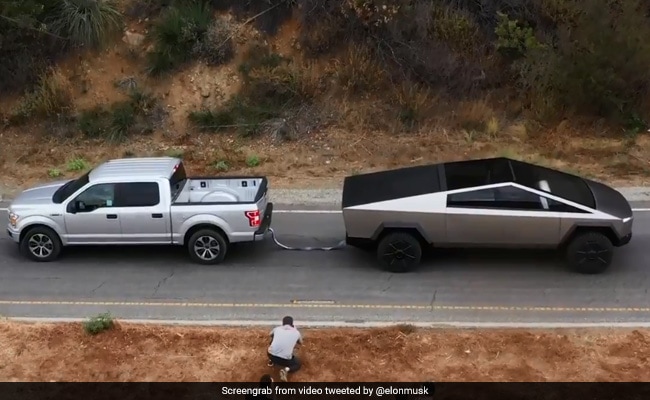 Elon Musk tweeted a video of Tesla Cybertruck and Ford F-150 in a tug-of-war.

Elon Musk has been tweeting furiously about the new Tesla Cybertruck since it was unveiled on Thursday. The company's first electric truck saw its 'unbreakable' windows shatter during the launch, but that hasn't stopped Mr Musk from taking a swipe at its rival Ford F-150. According to news website CNET, the Ford F-150 is the best-selling truck in the US. On Monday, Elon Musk tweeted a video of the Cybertruck besting Ford F-150 in a game of tug-of-war.

The video shows a Tesla Cybertruck attached to a Ford F-150 by a rope. The Cybertruck easily pulls the Ford vehicle uphill, 'winning' the contest.

The video has been viewed more than 12 million times on Twitter. However, many people, including astrophysicist Neil deGrasse Tyson, raised questions about how fair the contest actually was.

A badass @Tesla looking like it's doing a badass thing. But if the @Ford F-150 is RWD **with no payload** then weight on the Rear Axle is greatly reduced, offering only mild traction for the Tesla to overcome. This contest is more about the Physics of Friction than Engine Power.

One Twitter user pointed out that the Ford truck has a two-wheel drive, as opposed to Tesla's four-wheel drive, which made the comparison unfair.

Smart move Elon, giving the F-150 the weaker engine with 2 wheel drive of course it will loose, give it a 3.5 EcoBoost and I swear it roblox truck wouldnt stand a chance

"You started pulling the F-150 before it even had a chance to spin the wheels. Of course it's going to drag it," another said.

Coming from someone that has grown up in the midwest and has seen this thousands of times. You started pulling the f150 before it even had a chance to spin the wheels. Of course its going to drag it. Do the same test but let the f150 start and see if your mars rover can recover!

Vice President of Ford X Sundeep Madra was among those who seemed to think the fight was unfair. A few hours ago, he tweeted Elon Musk, asking the Tesla CEO to send them a Cybertruck so they could do an "apples to apples" test.

Elon Musk seemed unfazed by the challenge as he responded "Bring it on".

It remains to be seen who will win this Tesla vs Ford tug-of-war.

Elon Musk has long been using his 30 million Twitter following as a platform to sell Tesla's vehicles. "Better truck than an F-150, faster than a Porsche 911," he tweeted over the weekend.